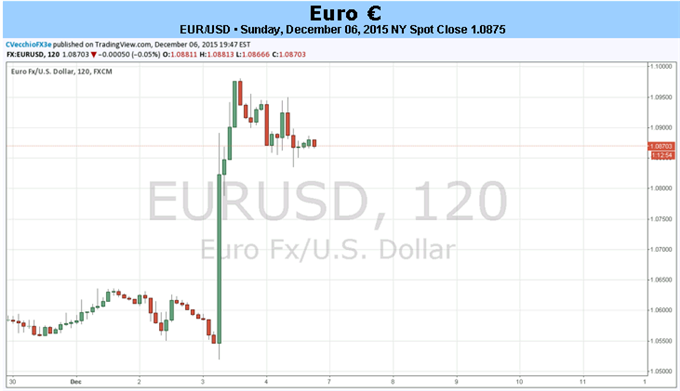 ECB Post-Mortem: Higher in ST before Lower in MT for EUR/USD

- The ‘goldilocks’ NFP print stabilized EUR/USD, and a Fed rate hike in December is basically a lock.

In what was one of the largest single-day moves since the Federal Reserve initiated QE1, EUR/USD surged on Thursday and closed the week positive for only the second time since the start of Q4’15. The EUR-crosses were well-supported by week’s end, with EUR/JPY finishing higher by +2.95% to ¥133.88 and EUR/USD closing up at $1.0875, a +2.71% gain. The market’s disappointment around the European Central Bank’s meeting on Thursday was rather evident, although it seems the market got ahead of itself, given proximate conditions leading up to Thursday.

The conditions leading up to Thursday, ex-inflation¸ were not the ones that necessitated ECB policy action. Leading indicators, like the most recent PMI readings, suggested that growth rates estimates were at four-year highs. The EUR/USD exchange rate of $1.1100 by which the ECB underpinned its staff projections on through September 2015, was some +5.5% higher than the actual spot EUR/USD rate on the day of the December policy meeting. With energy prices still on the decline, truly inflation has been the only thing working against the ECB: the exchange rate and other financial market conditions have been very accommodative and supportive of the recovery in recent weeks. Unlike in July 2012, when President Draghi promised to do “whatever it takes” to keep the Euro-Zone together – a time when 10-year yields in several of the PIIGS were hovering around 7% - the current economic backdrop isn’t one that warranted a ‘bazooka’-like response by the ECB.

For now, the 10-bps deposit rate cut and the extension of the QE program to March 2017 will have to suffice, even if the market was looking for perhaps a longer extension (to a year or leaving it open-ended) or an increase in the run rate (to €75 billion or more per month; instead it still resides at €60 billion per month). This, in turn, leaves many tools in the ECB’s toolkit should it want to act again in the future, but that window may be closing.

As we suspected in the run-up to the meeting, the increase in easing may be the result of a soft inflation environment, and thus, provoked a reduction in short-term inflation forecasts (per the staff projections), but the fundamental feedback loop of easier policy amid improving economic data otherwise raises the prospect of improved GDP figures a few years down the line.

The upheaval around the ECB last week wasexacerbated by extremes in positioning among speculators in the futures market. As of the week of November 24, there was a build up to 175.5K net-short contracts from 164.2K net-short contracts for the week ended November 17. Thanks to the lack of pop behind the latest ECB stimulus, the unwind of the short Euro position is coinciding with a drop in equity prices in the Euro-Zone, and likewise, a backing-up of yields, similar to what happened in May this year. This is evidence of financial capital flow (vis-à-vis the portfolio rebalancing channel effect) moving in the opposite direction that the ECB desires.

In the short-term, with the Federal Reserve’s December 16 meeting coming up fast, it’s possible and even likely that traders reduce extreme positioning further in EUR-crosses and USD-pairs alike. There’s some historical precedence for the early-stages of a Fed rate hike cycle to lead into a disappointing initial weeks for the US Dollar, and with the ECB now less dovish than the market was expecting, EUR/USD could see prices push even further higher. Similarly, retail crowd sentiment supports further gains in EUR/USD. 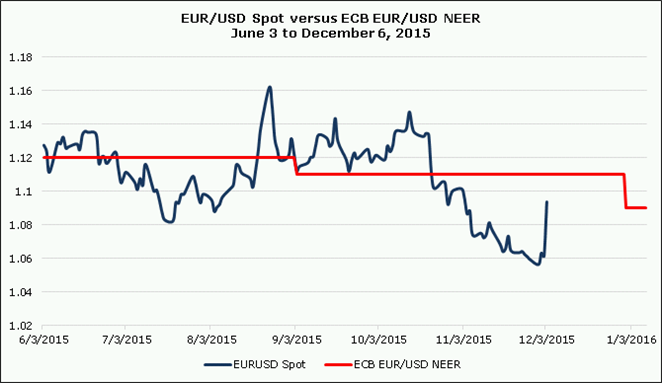 If EUR/USD has potential yet to rally further in the short-term, the medium-term prospects for EUR/USD are still bearish. The labor market seems in good conditions heading into what should be the first rate hike in almost a decade, and should US economic data hold up through Q1’16, the Fed may look vindicated before making a policy mistake; markets could easily price in more than the current two 25-bps rate hikes being priced in through the end of 2016.

On the ECB’s side, now that its technical assumption (nominal effective exchange rate, or "NEER") for the EUR/USD spot price in 2016 is $1.0900, any sustained EUR/USD rallies will reflexively increase the likelihood that the ECB will have to enhance its QE program yet again as financial conditions – currently in the ECB’s good graces – become a headwind to the Euro-Zone recovery yet again.

Lastly, as we approach the holidays and thus less liquid markets through the end of the year, it's worth reviewing principles that help protect your capital. We call these principles the "Traits of Successful Traders." –CV