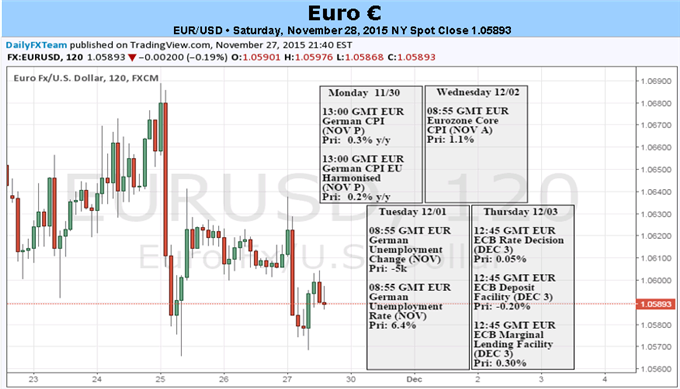 EUR/USD Prepares for its Most Important Week in Months (If Not Years!)

- Data during the holiday-shortened week was generally constructive for EUR/USD losses.

Euro rates were mixed during the holiday-shortened week, as traders and investors alike prepared for what should be the most important week in years for the Euro, but especially EUR/USD. EUR/USD was the weakest EUR-cross, losing -0.45% to $1.0589, while EUR/GBP was the strongest, edging up by +0.69% to £0.7046. Markets have proven jitterier on approach to the December 3 European Central Bank as the outlook for what Draghi & co. might do has become both more transparent and opaque at the same time.

In some regards, the market has effectively priced in the first half of expected easing from the ECB: a cut to the deposit rate. This may have been priced in starting on October 22, when President Mario Draghi suggested that rates had not reached their lower bound – a remark that cut against the entire market’s understanding of potential ECB policy outcomes. This development garnered a significant negative reaction by the market on October 22, when EUR/USD saw a sharp >200-pip decline, mirroring the reaction in price on September 4, 2014, when the pair fell by -206-pips after the ECB announced a surprise cut to the deposit rate. So, if a deposit rate cut is coming on Thursday, the market may have already effectively priced it in (and then some): EUR/USD dropped from near $1.1350 ahead of the October 22 meeting to a closing low of $1.0589 this week.

In no uncertain terms, as ECB policymakers have talked up the high likelihood of a rate cut on Thursday, they have also in turn failed to provide any clarity – hence policy become more opaque as well – as to what they intend on doing with their QE program. While a lot of EUR/USD’s decline over the past month has to do with markets pricing in the Federal Reserve raising rates on December, it also has been fueled by speculation that the ECB will announce some form of enhancement to the QE program: an increase in the program’s duration, an increase in the run-rate of asset purchases, and/or an expanded universe for accepted collateral.

In light of the fact that markets beyond FX have started to behave in a manner that indicates positioning front-running. Yields across Europe, not just in the Euro-Zone, have plummeted once again (but also in the Euro-Zone, too). For a time this week, yields out to seven years were negative in Germany, and yields out to 14 years were negative in Switzerland. Purchasing debt with these yields indicates that the investor would actually have to pay these governments; which means those purchasing these bonds are most likely betting on capital appreciation. In order for these bond prices to go higher and thus yields lower, the ECB would have to be behind a significant dovish shift in policy to prevent a backing-up of yields, similar to what happened in May this year.

At this point in time, a deposit rate cut is most likely priced in, as is one of our identified three enhancements to the QE program. If the ECB is able to deliver more than this, EUR/USD as do all EUR-crosses have a strong chance of continuing lower. Yet, in what is the more likely outcome now that Euro-Zone economic data ex-inflation is continuing to improve (the Euro-Zone PMI readings just hit four-year highs), the ECB will choose not to waste the bullets left in its chamber and instead leave open the possibility for more easing in the future. If downgrades are prevalent in the latest staff projections, these may act as a cap to potential short covering in the Euro complex.

Given the trifecta of major events at the end of the week – the ECB’s last policy meeting of 2015 on Thursday; Federal Reserve Chair Janet Yellen gives a speech and testimony on Thursday; and the November US Nonfarm Payrolls report will be released on Friday – traders would do well to heed warnings on the expected surge in volatility. The recent study by DailyFX Quantitative Strategist David Rodriguez showed how markets are pricing in the most volatile environment for EUR/USD not only in 2015, but perhaps over the last ten years overall! Given this expected volatility, traders operating in EUR-crosses over the coming week might find it beneficial to use "market range" orders when placing a trade to determine a comfortable range of prices where the order can execute.

Our concerns about a potential upheaval around the ECB this week are further supported by recent extremes in positioning among speculators in the futures market. As of the week of November 17, there was a build up to 164.2K net-short contracts from 142.9K net-short contracts for the week ended November 10. In context of prices, right after EUR/USD fell into its yearly low around $1.0460, speculators held 226.6K net-short contracts. It’s getting crowded in the short Euro trade, which means if the ECB disappoints, EUR/USD could be ripe for a short covering rally before the Fed’s December 16 policy meeting. As I’ve written about recently, the Fed could be setting up the US Dollar for weakness even if it hikes rates; a full-fledged EUR/USD reversal (in the scope of hundreds of pips to the upside) could develop around these central bank meetings over the next two weeks.

Lastly, as we approach the holidays and thus less liquid markets through the end of the year, it's worth reviewing principles that help protect your capital. We call these principles the "Traits of Successful Traders." –CV