Amid Holiday, EUR/USD Prepares for Huge First Week of December 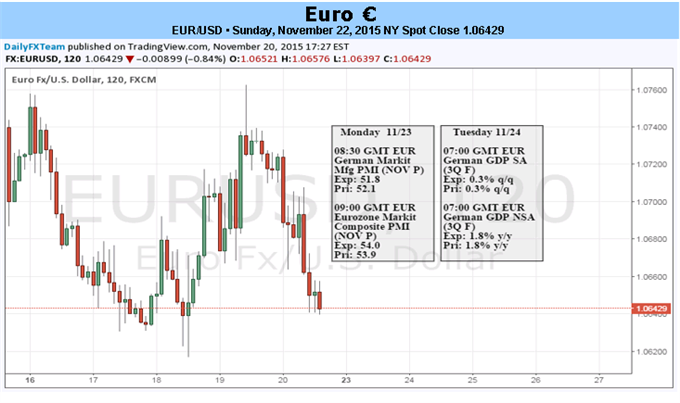 - EUR/USD continues to track its daily 8-EMA lower as the downtrend from October 22 remains intact.

- EUR/JPY may be well positioned for a break to yearly lows during the rest of 2015.

With European Central Bank policymakers, in particular President Mario Draghi, paving the way for dovish action at their meeting on December, the Euro took another hit across the board last week. EUR/USD, after briefly flirting with a move towards $1.0800, closed the week at $1.0643. Markets are have been pricing in the events at the end of the first week of December, and for good reason: the ECB has its last policy meeting of 2015; Federal Reserve Chair Janet Yellen gives testimony in front of Congress; and the November US Nonfarm Payrolls report will be released. It’s going to be a very important few days.

Before then, we have an abnormal week ahead of us, with the US Thanksgiving Day holiday on Thursday, shuttering US bond and equities markets and leaving markets lacking liquidity all the while. In recent years, as is typical, the low liquidity conditions have led to sporadic price movements. These choppy conditions can prove to be a difficult environment to trade in. As such, especially given the expectations for the first week of December around the EUR-crosses, it's worth reviewing principles that help protect your capital. We call these principles the "Traits of Successful Traders."

The next few days bring only a light smattering of data relating directly to the Euro, but as they are not of the inflation variety, there impact may only prove passing for a brief few moments; it’s highly unlikely that any print, of even the data collectively this week, will be considered significant enough to have a material impact on the ECB policy meeting on December 3.

Preliminary November PMI data for Germany, France, and the broader Euro-Zone will be released on Monday and should prove only minor intraday catalysts. On Tuesday, the final Q3’15 German GDP report will be released, as will the November German IFO survey; the latter of these two data sets brings more “new” information table than the former, so we’ll be looking to that for a market concerted market response. Unlike last week, which was replete with ECB policymakers speaking, this week the calendar is largely absent of meaningful commentary.

As we keep our attention turned for the first Thursday and Friday of December, one aspect of the Euro’s recent decline worth watching is positioning among speculators in the futures market. As of the week of November 17, there was a build up to 164.2K net-short contracts from 142.9K net-short contracts for the week ended November 10. In context of prices, right after EUR/USD fell into its yearly low around $1.0460, speculators held 226.6K net-short contracts. It’s getting crowded in the short Euro trade, which means if the ECB disappoints, EUR/USD could be ripe for a short covering rally. –CV