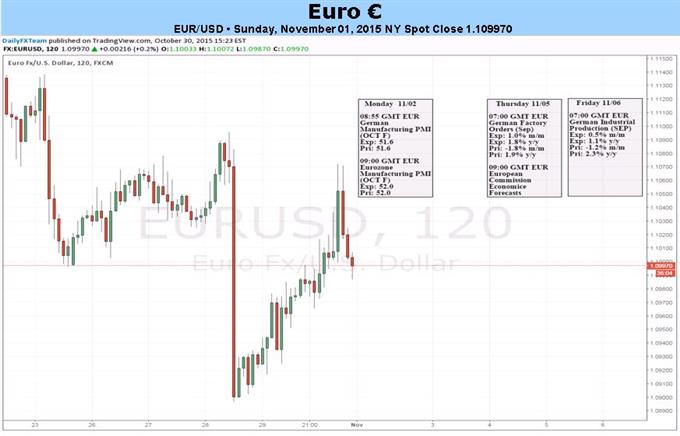 - EUR/USD remains below its trendline from the March, April, July, and August lows.

Weeks removed from both the European Central Bank and Federal Reserve policy meetings, volatility in FX markets declined the past week, leading to constrained ranges in EUR-crosses and USD-pairs alike. EUR/USD declined sharply by a mere -0.11% to $1.1006, while EUR/GBP – the worst performing EUR-cross – only slipped by -0.85% to £0.7134.In the short-term, it appears that recently signaled upcoming shifts in central bank policy – if it’s the Fed potentially hiking rates in December, or the ECB loosening monetary policy further – have been priced into the market.

For ECB policy changes in particular, markets have reacted swiftly to the threat of a deposit rate cut in December. Last week, we suggested that EUR/USD’s reaction after the October ECB meeting – in which President Mario Draghi suggested that the Governing Council was once again open to pushing its key rates lower, and perhaps deeper into negative territory – was very similar to the react of EUR/USD after the September 2014 ECB policy meeting, in which the ECB actually cut its deposit rate. In both cases, EUR/USD fell by approximately 200-pips. With EUR/USD having traded at $1.1350 ahead of the October ECB meeting and having just closed this past week out at $1.1006, we feel comfortable in saying a deposit rate cut in December is now fully priced-in by markets.

With markets also having rapidly priced-in the increased likelihood of a Fed rate hike in December after the October FOMC meeting – Fed funds futures contracts closed the week suggesting exactly a 50/50 chance, up from 32% pre-FOMC meeting on October 28 – EUR/USD is going to need some new catalysts if it is going to accelerate lower in what may be the early stages of a seven-month bear flag breakdown.

For starters, any data that underscores the potential forthcoming policy divergence between the ECB and the Fed will be an absolute minimum. Data released over the past week wasn’t that helpful in this regard, and in hindsight, the continued sluggish trend of US data (the US Citi Economic Surprise Index closed the week at -12.7) versus the surprisingly improving Euro-Zone data (the Euro-Zone Citi Economic Surprise Index closed the week at +32.7, just off the yearly high set on September 29 at +35.8) explains EUR/USD’s lack of continuation lower. On the Euro-Zone side of the equation, two very important reports exceeded expectations: the Euro-Zone Unemployment Rate dropped to 10.8% in September, its lowest level since February 2012; and the Euro-Zone CPI Core rebounded to +1.0%, its highest level since July (there haven’t been two consecutive months of CPI Core above +1.0% since August to September 2013).

Reflecting the extent to which forthcoming policy shifts may have already been priced into the markets, Euro short positioning among speculators surged in recent weeks. According to the CFTC’s latest COT report, speculative positioning jumped to 105.9K net-short contracts, an enormous increase from the 62.6K level seen the week prior.

While there’s considerable room for more shorts to come into the market to drive EUR/USD even lower (speculative short positioning peaked at 226.6K net-short contracts for the week ended March 30, 2015), Euro-Zone data will need to deteriorate so that markets begin to speculate that December could bring about a change to the QE program in addition to a deposit rate cut, and US data will need to improve to give markets confidence that not only will the Fed hike in December, but it won’t push the US economy into a recession. Both are tall tasks in this environment, but if there was ever a week for volatility to reemerge, it was this one: the vaunted US Nonfarm Payrolls report for October will be released this Friday. –CV