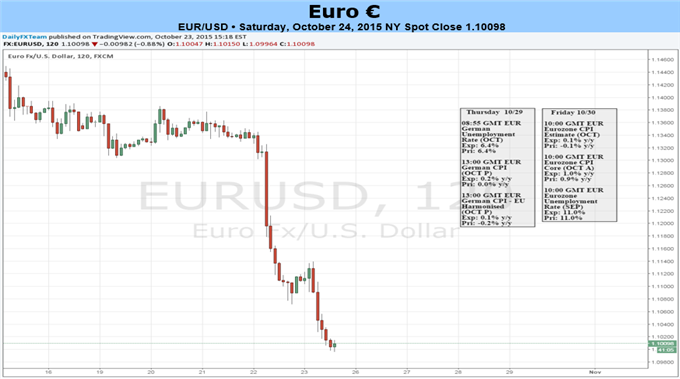 - Thursday’s ECB meeting shocked markets, sinking EUR/USD under $1.1100 by the end of the week.

The European Central Bank surprised at their meeting on Thursday, and now market participants are discounting the next wave easing to commence in December. Two EUR-crosses stood out in particular this week, given their reaction to the ECB and their respective ensuing significant responses: EUR/USD declined sharply by -3.00% to $1.1011, breaking its uptrend from the March, April, and July lows in the process (perhaps the beginning of a longer-term bear flag); and EUR/AUD dropped by -2.31% to A$1.5258 (losing its uptrend from the April, May, and June lows).

Make no mistake about it: the prospect of unexpected looser ECB policy due to deteriorating fundamentals provoked a significant shift in technical across the EUR-spectrum (especially in EUR/AUD, EUR/GBP, and EUR/USD). Considering what the ECB may have signaled through President Mario Draghi’s press conference, the break in prices this week may be just the beginning of the next leg of broad Euro weakness (at least through the end of the year).

There are two big takeaways from the ECB meeting. First, that the ECB’s rate policy has not reached its floor, contrary to prior indications made by President Draghi and other Governing Council members over the past few months. Thus, the development that the ECB is now considering cutting its deposit rate once more garnered a significant negative reaction by the market; in EUR/USD, the sharp 200-pip decline on Thursday mirrored EUR/USD’s reaction on September 4, 2014, when the pair fell by -206-pips after the ECB announced a surprise cut to the deposit rate.

If a deposit rate cut is coming in December, the market may have already effectively priced it in: EUR/USD dropped from near $1.1350 ahead of the meeting to a closing low of $1.1011 this week. It’s the second takeaway from the ECB meeting that will be the potential fuel for further Euro losses going forward: the ECB’s apparent lack of faith in a continued rebound in growth and inflation readings. Citing concerns over growth in emerging markets and stagnant energy prices (the latest Euro-Zone CPI data showed headline inflation fell negative to -0.1% y/y while core inflation was only +0.9% y/y), the ECB has found the prospect of keeping policy steady unpalatable. Changes to the QE program seem likely, perhaps its size, duration, or run rate.

We must acknowledge the market’s reaction to the ECB and size it up to prior trading conditions. Indeed, if the ECB is prepping the market for more accommodation, we’ve already seen this play out earlier this year. In the course of events as the EUR-crosses depreciated, two other things happened this week: yields in Europe fell; and equity markets around the world rallied. This is a familiar story.

As we’ve previously written on the subject of ECB easing, “In a truly bullish world driven by QE portfolio rebalancing channel effects, the Euro would depreciate amid lower yields and stronger equity markets (something that played out from December through early-March) (or vice-versa: the Euro appreciating amid higher yields and weaker equity markets, something that played out from March through June).” The ignition of trades driven by portfolio rebalancing effects could prove to be a major weigh for pairs like EUR/AUD and EUR/USD into year-end (once the ECB announces its changes to its policy, it’s likely that the Euro stops falling soon after, similar to how the Euro bottomed in March this year a few weeks after the official start of the QE program; once markets don’t have anything to look forward to price in, the effects tend to wear off).

For Euro bears, the timing could not possibly be better for the short trade to resume thanks to recent shifts in positioning. Ahead of the ECB meeting (through the week ending October 20), there were 62.6K net-short contracts held by speculators, the lowest level since the week of July 15, 2014. Everyone knows what happened from July 2014 through the end of the year: EUR/USD declined by over -1500-pips as speculative short positioning surged to 152.2K net-shorts. Now that markets are shifting back into a QE-driven environment, the ECB may have given traders the ‘all clear’ to start rebuilding short Euro positions once more. –CV