Major Euro Influences to Come from Within, Less Likely from Abroad 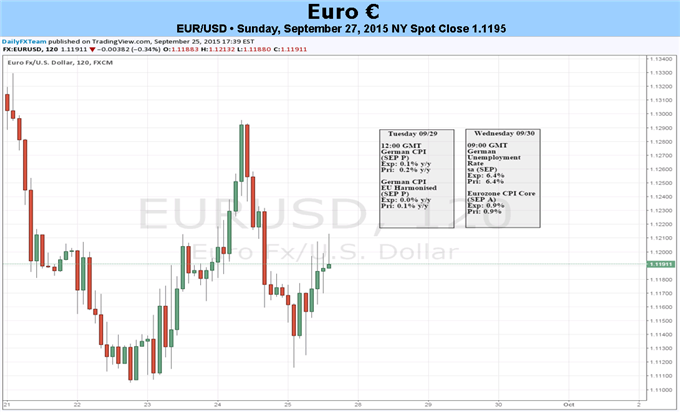 - The retail trading crowd remains net-short EURUSD, although positioning has thinned out.

In the week after the FOMC’s September meeting, the Euro failed to gain any traction against the US Dollar, and may have only been helped along by further volatility in global equity markets. EURUSD closed the week down-0.92% at $1.1195, after falling close to $1.1100 and reaching its lowest levels since September 4. For the most part, focus over the past week – thanks to a quiet economic docket – was on whether or not the European Central Bank could be moving closer to another round of easing in the next few months. The case is compelling.

The Euro, viewed from the interest rate perspective, is still a weak currency fundamentally. Bond prices across the region continue to flounder, with yields in Germany negative out to four years right now. The 5-year German bund yield closed the week at +0.02%, while 5Y5Y Euro-Zone inflation expectations came in at +1.602%; as long as domestic nominal yields remain below expected inflation levels for comparable time horizons, Euro-Zone-based investors will be forced to seek yield outside the region. In time, this should prove to be a negative influence across the EUR-crosses as investors seek higher yielding assets elsewhere.

In the coming days, the Euro will be influenced by inflation data more than anything else on the economic calendar. As the core of the ECB’s sole tenet of monetary policy, incoming inflation data against a backdrop of markets anticipating a change in central bank policy could prove to be highly caustic. On Tuesday, the preliminary September German Consumer Price Index will be released, and is expected to show deflation month-over-month and further disinflation year-over-year. September Euro-Zone CPI figures released on Wednesday will show similar price developments; if both shows signs of deflation and/or disinflation, the Euro could easily see more downside in the coming days.

From a broader perspective, the latest waves in the market – be it from the September FOMC meeting or otherwise – have forced investors to rethink the ECB’s policy timeline. Morgan Stanley’s “Months to First Rate Hike Index,” which provides a numerical representation of when the central bank would raise rates from present day, currently registers May 2018 as when the ECB will move away from its NIRP/ZIRP policies; at the beginning of the month, the index was forecasting February 2018 as when the ECB would make its rate move. Over the course of three weeks, markets have priced in an additional three months of easy monetary policy from the ECB.

If incoming inflation data disappoints, markets could push back the timeline for the expected future ECB rate hike even further, implicitly dragging forward expectations of the next wave of easing. Provided the correct catalysts – say, soft Euro-Zone and German CPI reports and another poor performance by Brent Oil prices – traders could see reason to jump into the market ahead of an anticipated policy change (which we think will come not in October, but in December).

Short positioning in the Euro has thinned out over recent weeks, with speculators currently holding 81.0K net-short contracts at the end of the week of September 22, 2015, per the CFTC’s latest COT report. This level is well-off the highs seen a month ago (115.2K) and from earlier this year (226.6K), suggesting that there may be considerable downside potential in any EUR-crosses should speculation over another wave of ECB easing start to trend. –CV