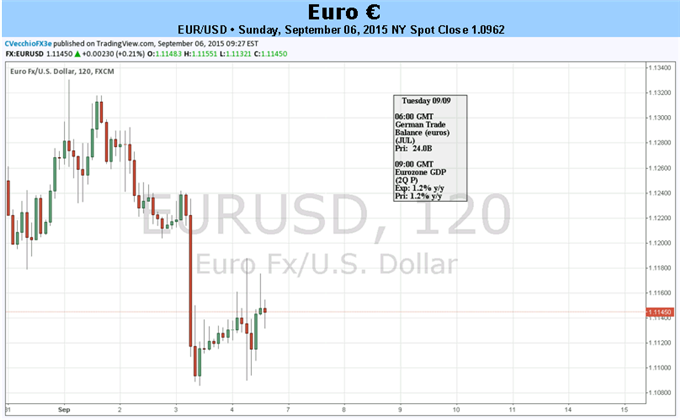 - The Euro was primed to fall around the ECB meeting, given recent developments along the inflation front.

- Forex seasonality studies for the QE era suggest that September will bring about big moves in all major pairs.

Outside of weak performances by EURJPY (-2.62%) and EURUSD (-0.32%), the Euro had quite a strong week during the latest period of high yield FX and emerging market FX liquidiation. EURAUD (+2.46%) and EURNZD (+3.38%) led the way higher as concerns over Chinese growth and central banks’ collective ability to keep markets in check continued to roil investor sentiment.

Even though the calendar has turned to September, and we’ve already had major events such as the European Central Bank meeting and the release of the August US labor market report, it doesn’t feel like September has actually started yet. Part of this could be due to the odd schedule for markets last week – UK markets were closed on Monday, Chinese markets were closed on Thursday and Friday, and US markets will be closed Monday – and there’s some evidence to suggest participation rates in those markets that were open were quite low (volume figures in European equity markets has yet to near its ‘full’ capacity from earlier this summer).

Typically, the second week of September really is the first full week of trading, and given the events unfolding around the globe, it seems highly likely that the incoming wave of liquidity will also help sustain the volatility that’s been present in markets. For FX in particular, all focus seems to be honing in on the September 17 FOMC meeting. In this regard, EURUSD and US equity markets will share a similar fate: if the Fed doesn’t cut rates, it will come at the US Dollar’s expense, and US stocks should rally.

EURUSD in recent weeks has been behaving more like a safe haven, even though in context of positioning data, it’s clear EURUSD’s elevation alongside global equity markets falling is a symptom of it being a low yielding funding currency. Foreign asset managers placing capital in European equity markets necessarily have had to hedge their long Euro-Zone equity position with a short EUR position. In effect, foreign investors must have been hedging long Euro-Zone equity investments, so that they wouldn’t get burned on FX conversion when they wanted to sell their positions.

Sure enough, in recent weeks, we’ve seen the EURUSD rally coincide with short covering in markets. As of the week ended September 1, speculators held 67.9K net-short contracts, down 70% from its peak level at 226.6K net-short contracts the week ended March 31; more recently, positioning has contracted by 40% from its mid-August peak (115.2K). Part of this event can also be attributed to the broader carry trade unwind in HY and EM FX (hence vapid performances from the Aussie and Kiwi relative to the Euro).

Even with the ECB laying out its new dovish view of the world – one that views inflation as staying in its rut for the several next few years – the Euro’s role as a funding currency has been turned on its head amid the carry trade unwind. This leaves the Euro in a tough situation, where it may be more susceptible to foreign influences versus HY and EM FX, but trades more on its own fundamentals versus the British Pound, the Japanese Yen, and the US Dollar. In the coming days, it would be surprising if the EUR-crosses moved in unison (aka due to EUR-centric events). –CV