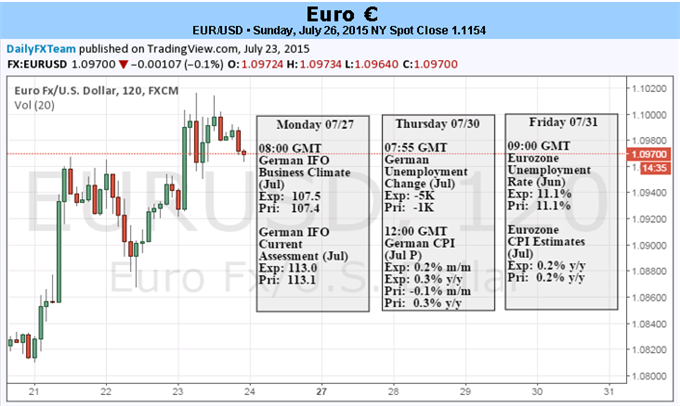 - As EURUSD has steadied under $1.1000 after weeks of Greek-driven headlines…

- …the EUR-complex in general is starting to trade more to the tune of an ECB’s QE-driven market (but not fully yet).

If last week was an indication of things to come, then FX markets may be on the verge of reverting to a familiar trading environment: one driven by quantitative easing (QE) portfolio rebalancing channel effects. As the dust has settled around Greece, now that with each passing day the country inches closer to unlocking a €86 billion EFSF-sponsored aid program, the Euro has started to shake off the burden of being driven by Greek-related headlines.

The EUR-crosses were, and still are likely to be, driven by the broad notion that the Euro itself is a funding currency. Yet there may be a ripple or two to overcome before that environment is achieved again, and it’s the fallout from the market being tightly wound up around Greece for the past two months.

But for the fact that the US Dollar saw a huge leg up on the week after jobs data laid clear the possibility of a very strong July US Nonfarm Payrolls report, and therefore a higher probability of a rate hike in 2015 by the Federal Reserve, the EUR-crosses (saved EURUSD) moved in tandem higher. In the course of events as the EUR-crosses climbed, two other things happened this week: yields in Europe fell; and equity markets around the world fell.

What this price action across asset classes is indicative of is a repricing of the risk spectrum in a non-Grexit world. After both core and peripheral yields rose for weeks around Greek-related headlines, the removal of the Greek catalyst and higher probability contagion outcome reignited the demand for EUR-denominated debt.

The chain reaction lays clear now: now that core and peripheral European sovereign debt were overpricing the possibility of a negative event around Greece (hence the lower prices and higher yields), it made sense for traders/investors/fund managers to rebalance exposure in their portfolios; equities around the globe were sold in order to raise capital (explains weaker equity markets); said capital was converted into Euros (explains the rally in EUR-crosses); and said converted capital was invested in seemingly undervalued bond markets (explains the plummet in European yields).