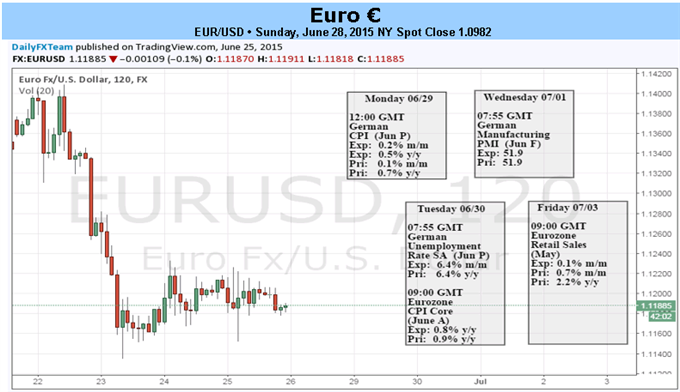 Euro Set for Rocky Week as Greece Stares into the Abyss

- The Greek debt negotiations only recently started to impact charts, and not in a good way for the Euro.

- FX markets honed in on the seriousness of the Greek negotiations by Friday, leaving the Euro weaker.

It was a rough week for the Euro, and it doesn’t look like it’s about to get any easier. EURUSD declined by -1.66% to close the week at $1.1189, while EURJPY slipped by -0.72% to ¥138.31; the majority of the declines developed mid-week when it became clear that Greek negotiators and their creditor counterparts would be unable to reach an accord over short-term financing (to help Greek meet its June 30 obligation to the IMF), and after a breakdown in negotiations at the very last moment on Friday, it now seems the Euro is guaranteed a rough few days this week.

Negotiations may be ongoing, but: Greece has effectively said it won't pay the IMF on June 30; the ECB has said it won't raise the ELA facility at present, putting the Greek banking system on the brink of a liquidity crisis, forcing officials to institute capital controls and keep banks closed on Monday; and Greek officials are putting the country to a referendum vote over the Eurogroup's aid proposal, in which the government will campaign against it in a lead up to a July 5 vote. The Euro is rightly upset.

The IMF’s statement today was riddled with disappointment, as it’s clear that the Greek government is digging in to its pre-election promises (which may be good for political accountability domestically, but the position is at odds with what the Eurogroup is offering, so it’s unworkable situation). The chance of an agreement ahead of the referendum vote seems slim at this point, leaving the Euro exposed to greater volatility as markets hone in on next Sunday.

As we made note of on Friday, but is absolutely worth reiterating now, is the notion of risk management with respect to the EUR-crosses. It may be deemed best risk management practice for traders to reduce position size and leverage in EUR-crosses for the foreseeable future. While the potential outcome for Greece is unknown - the absolute magnitude of the fallout around a positive or negative outcome will be enough to have a significant impact on prices over the coming week at a minimum.

Similarly, it is important to give respect to the Swiss National Bank here, as the Swiss Franc could easily regain its appeal as a regional safe haven currency if the Greek saga continues to take turns for the worse. In recent days and weeks, SNB policymakers have commented on how the Swiss Franc is overvalued. Logically, the SNB may be more aggressive in an effort to weaken the Swiss Franc sooner rather than later in order to stem a wave of capital seeking safety in the Swissie, before speculative flows accelerate beyond containment. After the SNB’s decision to remove the EURCHF peg in January, it’s clear the SNB will do whatever it deems best for Switzerland irrespective of the outcome on markets; and traders may just want to steer clear of CHF-crosses altogether.

The Greek debt saga’s impact is not limited to the Euro or the Swiss Franc; the Japanese Yen may immediately switch into a ‘risk-on, risk-off’ safe haven currency once more, leaving USDJPY on uncertain terms even if EURUSD declines. Speaking from a technical perspective, EUR-crosses have started to fail at significant support levels (former resistance) after breakouts, while EURUSD has experienced the failure of two triangles pointing to prices at $1.1050 or lower – which is materializing in the pre-market thus far (just before 17:00 EDT/21:00 GMT on Sunday, EURUSD was trading near $1.1000). Traders could be ready to torment the Euro if the Greek saga continues down its current path, as there were still only 99.3K net-short contracts in the futures market for the week ended June 23, well-off the all-time high of 226.6K set the week ended March 31. A swell in short positioning once more could easily push EURUSD towards $1.0800 as the year reaches its midpoint. –CV