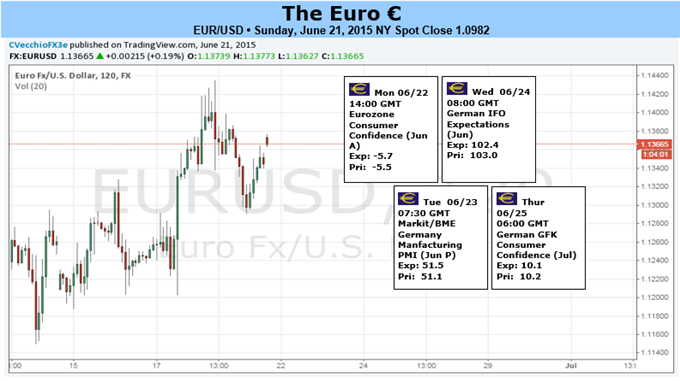 - The initial reaction to the June FOMC statement was for a stronger EURUSD.

The Euro looks to close out June as the top overall performer among pairs covered by DailyFX Research after a mostly strong third week of the month. EURGBP dropped by -1.30% to £0.7148, resulting in the British Pound taking the crown of best performer in June from the Euro (EURGBP has depreciated by -0.33% overall in June). Elsewhere, EURJPY rallied by +0.21% to ¥139.28, and EURUSD gained +0.76% to $1.1352.

As was argued early last week, the day-to-day, interim headlines for Greece have not held major sway over price action. Instead, traders have thus far only given attention to a ‘final’ solution before heeding any semblance of care: a decision that results in the June 30 deadline for Greece to repay the IMF simply another checkpoint on the road to redemption for Greece by way of an expanded or new bailout program; or one that sees Greece enter default and lose full-fledged membership to the monetary union.

Neither bridge has been crossed yet, and therefore traders haven’t given Greece the time of day (besides the media, of course). As the June 30 deadline approaches, headlines are likely to ramp up in terms of sentiment, both positive and negative from both Greece and her creditors. Traders may want to pay more attention to Monday, when an emergency session will be held in Brussels to discuss the state of Greece’s finances.

As markets hone their focus in on Greece this week, beginning immediately with the emergency meeting on Monday to the June 30 deadline next Tuesday, traders at the minimum should expect volatility to appear more significantly in markets. It may be deemed best practice to reduce position size/lower leverage and review risk management principles in order to prevent a Greek tragedy from impacting trading capital too greatly. Likewise, any long-term solution to Greece’s June 30 IMF payment should ripple to markets beyond FX, putting a potential major event on the near-term horizon. –CV