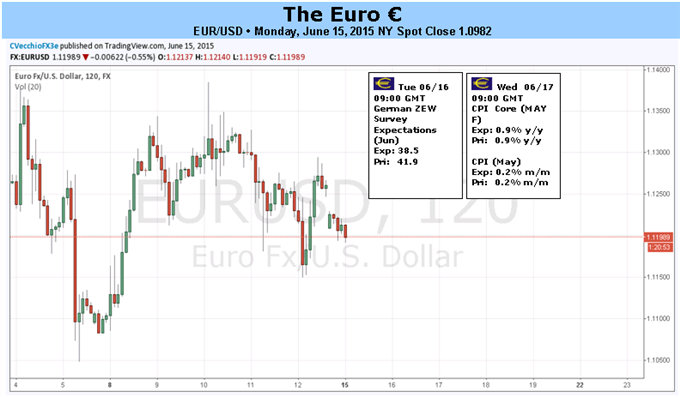 - EURJPY may be pulling back to a key technical level that will determine the viability of the breakout.

- Meanwhile, EURUSD has yet to breakdown through support that would accelerate a breakdown.

After a strong start to June, the Euro cooled off in the second week of trading as Euro-Zone data momentum eased, fears over a Greek default and/or exit from the Euro-Zone cropped up amid a breakdown in negotiations, and optimism over the US economy in Q2’15 gained pace. EURUSD finished but off of its highs, up +1.35% to $1.1266; EURJPY fell by -0.44% to ¥139.02 on the back of commentary from Bank of Japan Governor Kuroda; and EURGBP dipped by -0.53% to £0.7205.

Although short-term market-based volatility measures remain relatively quelled, the tide may be rising against the Euro, but specifically, EURUSD. A culmination of events has come crashing down on the 18-member currency, where rising European yields and a weak US economic backdrop may no longer be able to fuel its rally in the short-term.

Greece has entered a critical phase of negotiations with her creditors, with senior European Union officials acknowledging that default is on the table, with it increasingly unlikely that a cash-for-reforms deal will be pushed through over the coming days or weeks. With the IMF walking away from the negotiating table, it appears that the ‘can kicking’ may have reached the end of the road – unless of course the current Greek government folds on its pre-election campaign promises and accepts another dose of austerity.

The reemergence of Greek fears comes at an opportune time for the US Dollar, whose own fortunes may be turning higher after a stretch of considerably better economic data. The Citi Economic Surprise Index for the US has risen to -37.7, its highest level since the second week of February, on the back of improved consumption, housing, and jobs data for Q2’15. Meanwhile, Euro-Zone growth momentum has chilled, with the CESI Euro-Zone at +4.7, a touch lower than its reading a week earlier at +6.0.

Even though the Federal Reserve is going to keep rates on hold at this week’s FOMC meeting, it is likely that policymakers take the recent data as evidence that Q1’15 weakness was merely transitory in nature, and that the economy should reaccelerate as the year progresses. Accordingly, any commentary from the Fed that suggests a rate hike could come at or before the December 2015 meeting could prove to be a major tailwind for interest rate differentials in favor of a stronger US Dollar. Now that short positioning in the Euro has thinned out considerably – according to the CFTC’s COT report for the week ended June 9, there were 138.0K speculative net-shorts, nearly halved from the 226.6K net-shorts seen in March – the catalysts may be in place to knock EURUSD lower as the calendar turns into the second half of June. –CV