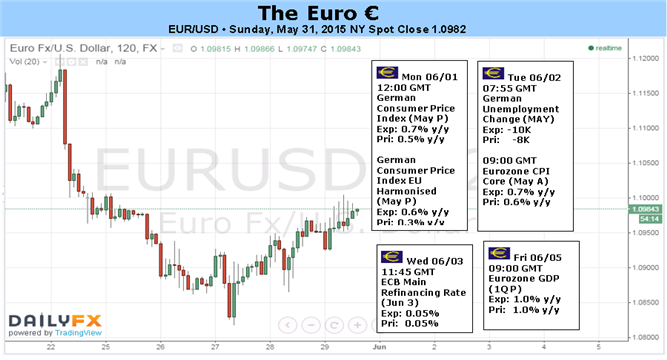 - EURUSD appears to have made a significant turn on the charts…

- …and recent gains seen in EURUSD may be setting up a ‘sell the rally’ opportunity.

While EURUSD was pressured into fresh monthly lows just above $1.0800, a late-week rally in the EUR-crosses wiped out nearly all losses accumulated earlier across the spectrum. Dodging disparaging headlines about Greece’s ability to reach consensus with her creditors, EURUSD only closed -0.10% lower at $1.0990, while EURAUD and EURJPY led the EUR-crosses higher by +2.22% and +2.02%, respectively.

The Euro’s sensitivity to the situation in Greece is bound to jump in the coming days, even if only temporarily, as a June 5 deadline for a payment to the IMF looms. This is a delicate situation insofar as the Greece government is purportedly open to defaulting on her obligations in order to maintain its political party’s pre-election promises. As far as the impact of the intraday headlines on the Euro, the likelihood remains low; but the ever so important tail risk scenario is becoming more probable, likely to leave traders a bit uneasy.

Of course, in the background, the ECB’s QE-driven trade – via the portfolio rebalancing channel effect – is dictating asset performances across the risk spectrum. In tandem, European sovereign yields are falling, the Euro is depreciating, and European equity markets are rallying (or vice-versa). This trilateral relationship should continue to persists, irrespective of the Euro’s direction.

In the very near-term, there is heightened risk to the Euro (and more specifically, EURUSD) as a calendar packed with medium- and high-ranked event risk is on the horizon. Event-driven volatility – particularly between the hours of 08:30 GMT to 14:00 GMT – will be well-represented this coming week.

Needless to say, there are items on the calendar over the next few days on both sides of the pond that are likely to increase volatility around EURUSD. Besides previously discussed influences lingering in the background – Greece and the ECB’s QE program – the one theme that will be put to the test this week, that could drive the direction of EURUSD for the coming weeks, will be the notion that the US economy has reversed its early-year slowdown. Only if the recent optimism over the US growth story in Q2’15 is confirmed by the upcoming data, will the rising interest rate differentials in favor of the US Dollar story take hold. By the end of the week, we should have a better idea of which way EURUSD will be trading for the foreseeable future. –CV