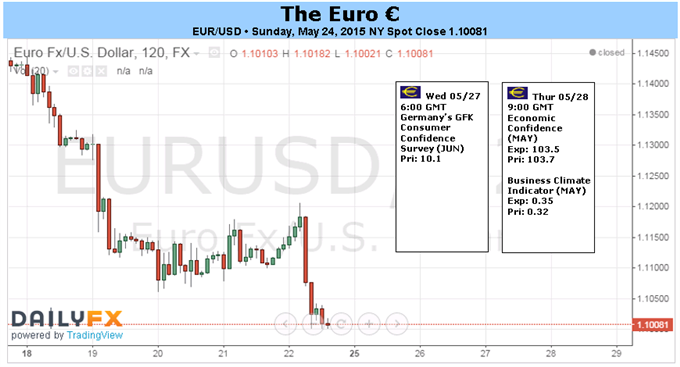 It was a very rough week for the Euro right from the get-go, as the 18-member currency wiped out all of its gains versus the US Dollar that had accumulated over the prior three-weeks. EURUSD plunged by -3.82% to $1.1008; EURJPY slipped by -1.98% to ¥133.76; and EURGBP fell by -2.28% to £0.7103. The main source of bullishness for the Euro – rising German yields – was abruptly removed from the equation by mid-week, when ECB Vice-President Benoît Coeuré said that the central bank would increase its pace of bond-buying in the short-run in order to balance out the lack of liquidity in markets (thereby making it more difficult for the ECB to achieve its monetary policy goals) in July and August.

In a sense, the ECB’s QE-driven trade – via the portfolio rebalancing channel effect – is dictating asset performances across the risk spectrum. In tandem, European sovereign yields are falling, the Euro is depreciating, and European equity markets are rallying. Investors are front-running the ECB by buying bonds and seeking riskier assets in the process; lower fixed income yields amid recently elevated inflation expectations dictates the need to seek out higher returns along the risk spectrum.

The ECB’s abrupt change of plans is coinciding with the beginning of a shift in US economic data momentum, which more or less has coalesced into the ideal environment for EURUSD declines. After weeks of disappointing economic data – unseasonably weak, even – the US economy has started to see patches of good data. Although the April FOMC minutes initially sparked some downside in the US Dollar, traders have quickly refocused to data released in the interim period since the last FOMC meeting: April US labor market data rebounding back towards its 12-month trend; and April US Housing Starts surging by over +20% to the highest level since November 2007.

The moment for EURUSD to stage a continued, meaningful rally may be behind us at present. While Greece is still a lingering backburner issue, its lack of impact on markets is a reflection of the lack of serious progress or erosion made with respect towards a long-term debt deal; traders have been lulled into a state of complacency and boredom. In turn, this means that Greece’s future potential as a catalyst is limited to explosive tail-risk scenarios only – markets simply don’t care for better or for worse.

If Greece does take a turn for the worse, which is possible with senior Greek government officials pledging to stick to their pre-election platform promises which run contrary to what Greece’s creditors want, there may be significant room for EURUSD to fall further. The market is no longer overcrowded in a short EURUSD position, with EUR speculative short positions having fallen for four straight weeks, and USD speculative long positions having risen for eight straight weeks. The short covering rally period has passed, and it will be easy for EURUSD to achieve further downside levels with so many traders now on the sidelines. –CV