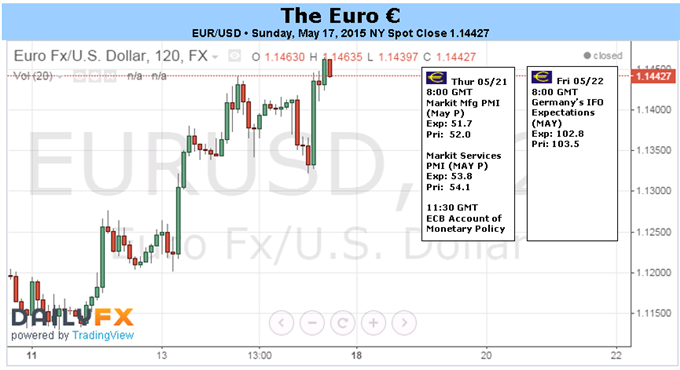 The Euro had another steady week of appreciation, posting gains against each of the most widely traded currencies in FX markets. EURUSD rallied by +2.10% to $1.1443; EURJPY rallied by +1.79% to ¥136.60; EURAUD gained +0.80% to A$1.4235; and EURGBP nudged higher by +0.24% to £0.7271. Amidst data that showed the Euro-Zone growth recovery is only proceeding at a modest pace, the Euro’s gains can once again be attributed to the higher interest rates spreading in core countries’ yield curves, which in turn has provoked further short covering.

Fueled by rising inflation expectations, speculative positions in the futures market eased to 179.0K net-short contracts for the week ended May 12, from an all-time high of 226.6K contracts for the week ended March 31. During the period of shorts being reduced, EURUSD managed to gain +6.64%, and is now +9.31% from its low set on March 16. The 5-year, 5-year inflation swaps closed the week at 1.795%, above the four-week average of 1.749%, capturing the recent elevation in energy prices. This gauge of medium-term inflation expectations briefly touched 1.865% on Wednesday.

The whole story isn’t necessarily explained by shifting yields and inflation expectations in the Euro-Zone. To wit, the Citi Economic Surprise Index for the Euro-Zone finished last week at +2.2, well-below the four-week average of +22.1. Rather, traders are covering their short positions on the basis of the ECB-Fed monetary policy divergence not being as much of a ‘sure thing’ as it seemed to be, thanks to the deterioration in the US macro picture.

For several weeks, we’ve wondered whether or not the early-year slowdown in the US economy could be attributed in part to another rough winter. In a sense, this year is no different than what we’ve seen in recent years past: data has been coming in well-below analysts’ expectations, as forecasters have tended to be too optimistic about the US economy upon the start of a new year. The CESIUSD remains near its lowest levels since July 2012.

Halfway through Q2’15, we can say that this is different. Even during a period of seasonal weakness, 2015 has been unseasonably weak. The average of the CESIUSD over the past five years (2010-2014) on May 15 is -12.52, whereas the 2015 reading currently sits at -62. Even compared to last year, when the cold winter roiled the economy in the first few months of the year, the CESIUSD only registered -11.4 on May 15. Needless to say, data so far in 2015 has been vastly underperforming expectations. With hopes about the US economic slowdown proving to be transitory fading themselves, the market is recalibrating its view on the US Dollar altogether. Thanks to the bloated Euro short position in the futures market, EURUSD is finding plenty of support these days. –CV