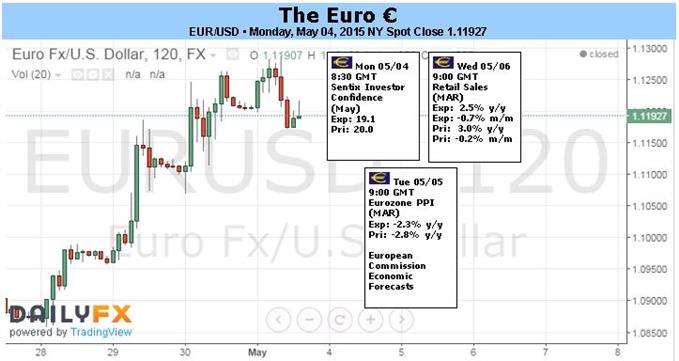 - The EURUSD rally was kickstarted by the disappointing Q1’15 US GDP release on Wednesday.

The Euro was easily the top performing major currency this past week, gaining +2.58% against the Australian Dollar, +2.91% against the US Dollar, and +3.85% against the Japanese Yen, the worst major performer. While there’s no single event or series of data that can be pointed to as the catalyst, it’s evident that a massive short squeeze is underway as the European Central Bank’s QE ‘trade unwinds’: short Euro, long European equities, and long European bonds. In concert with the Euro rally, European equity markets slid this past week, while both core and peripheral yields jumped.

Accordingly, as the ECB’s QE-driven trade has unwound, we’ve seen a sizeable (-7.9%) decline in speculative net-short positions in the futures market: there were 197.8K contracts as of the week ended April 28, 2015, a number that likely shrunk even further as EURUSD rallied +1.94% from the close on Tuesday through the end of the week alone.

Perhaps the most noticeable catalyst was the rise in medium-term inflation expectations, with the 5-year, 5-year inflation swap rising from 1.685% at the beginning of the week to as high as 1.797% by Thursday. Higher inflation expectations are further reducing the real return on already low-yielding fixed income assets; investors may have simply found themselves in the undesirable situation of holding low- or negative-yielding bonds in a rising inflation environment, provoking the sell off in the belly and long-end of yield curves in the Euro-Zone.

In the short-term, if rising inflation expectations proliferate, equity market and bond market weakness might continue, and the Euro may rally further. Even though Euro short positions have moderated, they still remain relatively stretched compared to positioning seen in other major currencies versus the US Dollar. From a charting perspective, the technical consolidation seen during March and April may have given way to a double bottom formation, opening the door for a potential EURUSD rally above $1.1500 over the coming weeks. The table is set for such a move, given positioning and correlated asset performances.

Over the next few days, there are relatively few obstacles in the way for the Euro to continue its covering move. Greece remains a concern, but barring its exclusion from the Euro-Zone, investors have more or less become comfortable (or complacent) with the day-to-day headlines regarding the debt negotiations. On the European data side, there is nothing truly noteworthy that may provoke investors to reassess their short-term trade horizon, although the European Commission’s updated economic forecasts on May 5 will be worth paying attention to. Outside of the Euro-Zone, the Reserve Bank of Australia rate decision on Tuesday and the US Nonfarm Payrolls report on Friday should be the most significant catalysts for price action this week. Truly, only a strong NFP report could slam the breaks on the EURUSD’s covering move, but after several weeks of disappointing data that haven’t abated at the start of Q2’15, the headline US labor market reading may only prove to be a minor impediment this week. –CV