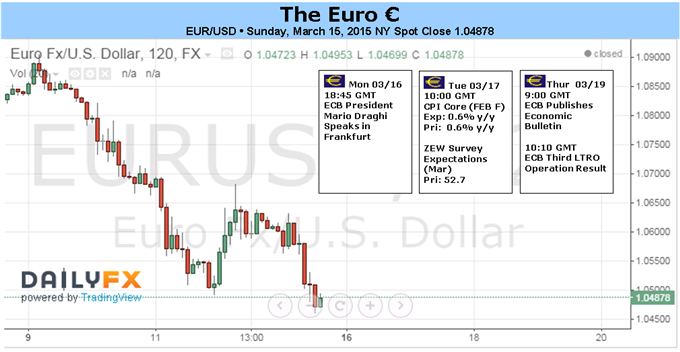 Euro in Freefall, but Losses against Dollar May Soon Find Relief

- The Euro is in a fast moving, trending market right now, and the safer trade is on the short side.

- Volatility in the US Dollar this week highlights the exhausted nature of the current rally.

The initiation of QE, on the surface, is not the sole reason for Euro weakness; instead, it is QE’s impact on the core countries’ yield curves that’s changing the Euro’s undercurrents. First, it’s important to consider the constraint of QE: no bonds with yields below the ECB’s interest rate corridor of -0.20% are being purchased. For Germany, this means that bond buying with be directed at the longer-end of the yield curve, as debt with 0-3 year maturities has already seen their yields hover below the corridor floor. This has already resulted, and will likely continue, in the core countries’ (and especially Germany’s) yield curves flattening out, with long-end yields converging near the corridor floor.

A flattening yield curve in Germany reduces interest rate differentials for the Euro, undermining the currency’s appeal and pushes it further into the territory of being a funding currency. (One needs to look no further than the German 5Y yield compared to Japan’s: it has been lower for the past several weeks and the differential has widened.) Market participants have taken the flattening yield curves in the core as a reason to pile back in to short Euro positions, with net-shorts among futures market speculators having risen back to 181.1K contracts as of March 10, 2015.

While pressure on the Euro may continue versus a broad basket of currencies, the recent losses versus the US Dollar have gotten into excessive territory. The greenback itself is seeing a rate of change develop that’s unseen since 2008 or 1987 – when the markets were roiled by financial crises. Despite terribly weak US economic data ex-labor, investors have taken the Fed at its word and have effectively priced in the first rate hike coming as soon as June 2015.

This week’s FOMC reading is far and away the most important event on the calendar for the EURUSD, and even if the Fed drops the seemingly important word “patience” from the policy statement, we may be looking at a ‘blow off’ type of event, rather than the sparkplug for the next leg down in EURUSD. Not only is the market quite short Euro, but it is also very long the US Dollar: as of March 10, there were 81.3K net-longs among speculators in the futures market, the highest amount ever (exceeding the previous all-time high of 73.2K). If the Fed is switching from a language-based policy (forward guidance) to a data-dependent one, then the market might quickly recalibrate and turn its focus to disparaging US consumption and inflation data that’s developed over the past few months. Even though the Euro may be in freefall at the present time, there may just be a point of relief coming up on the horizon in the near-future – at least for EURUSD. –CV