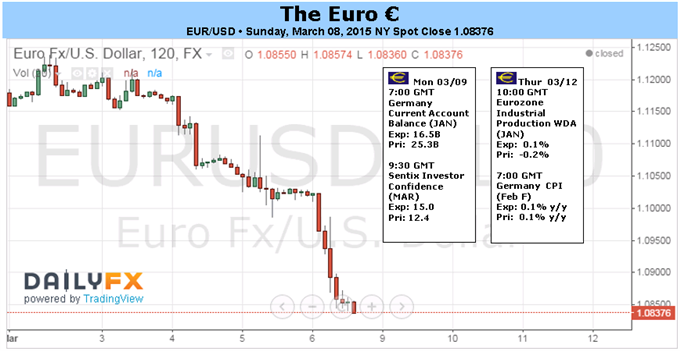 - The ECB press conference initially spurred a Euro rally, but the modalities of the QE program stunted the -gains.

- Another strong US labor market report dragged EURUSD under $1.0900 as the Fed’s rate liftoff looks closer.

March has ushered in a completely different mindset for the Euro relative to February. While last month was marked by steady consolidation and rangebound trading conditions, the first week of March was riddled by downside in the 18-member currency. EURUSD sunk by -3.25% to $1.0838, its lowest closing levels in almost 12-years, while EURJPY cratered by -2.22% and EURGBP slipped by -0.56%. Between the commencement of the ECB’s QE program and the latest US labor market report, the widening policy gap between the ECB and the Fed is proving to be the primary force driving the Euro right now.

The ECB’s meeting this past week wasn’t outright bearish for the Euro; it took a bit of parsing of President Draghi’s words to get to the meat of his message. True, the ECB upgraded its inflation forecast for 2016 and announced a rather optimistic assessment for 2017 (+1.8% y/y). Likewise, the 2015 and 2016 real GDP forecasts were bumped higher, and the 2017 forecast was cheerful. The Euro’s initial reaction to the forecasts was telling: the ECB thinks its new measures will be sufficient enough to solve the region’s economic woes, and the market initially reacted in such a manner that would indicate that the ECB wouldn’t need to ease further past its QE end-date of September 2016.

When President Draghi revealed that there would be a cap on the QE program – the ECB would not buy bonds whose yields were below the interest rate corridor floor of -0.20% - the Euro hit the skids. Perhaps this is an indication that market participants feel there simply won’t be ample supply of short-dated debt for the ECB to purchase in order to make its QE program viable; thereby boosting the possibility that the ECB will have to enact more easing down the road, as its current program eventually falls short of its goals. The icing on the cake was when President Draghi admitted that the ECB’s QE program could extend past September 2016, seemingly in conflict with the earlier assessment that the ECB would achieve its mandate of price stability by 2017.

If market participants feel that the current QE program will fall short of the ECB’s desired goals, then there is a bit of room for the Euro to fall. The overextended short position held by speculators in the futures market eased further ahead of the ECB’s meeting on Thursday, to 172.4K net-short contracts as of March 3, from 177.7K net-short contracts as of the week ended February 24. The high point for saturation this year was established during the week ended February 3, at 196.3K net-shorts – so there is more room for new bearish positioning in the market.

We’re now entering a lull on the economic calendar, now that the ECB’s meeting has passed and the February US Nonfarm Payrolls reinforced the notion that the Federal Reserve would raise rates at some point over the coming months. With the Fed’s next meeting set for March 18, we may be seeing a period of data and event digestion ahead. In any case, with questions surrounding the effectiveness of the ECB’s program and lingering concerns over Greece, the Euro remains in ‘sell the rally’ mode, as the recent stretch of better than expected data failed to alleviate any of the anxiety over the Euro-Zone’s economic trajectory. –CV