Euros Hope Lies in ECBs Economic Projections, Not in Greece 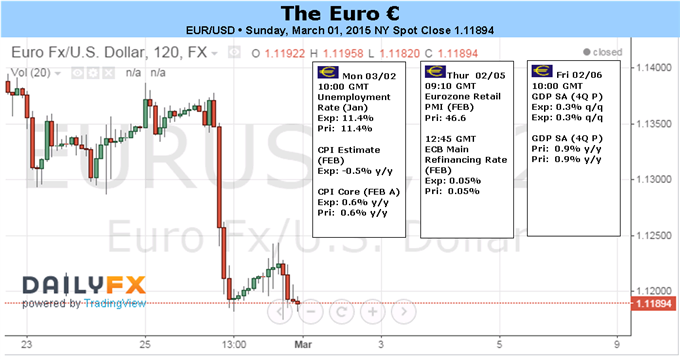 - The Euro struggled to gain traction all week, even after the Fed’s Yellen showed her dovish feathers.

- Selling into month-end provoked a break of the four-week range, and the crowd flipped to net-long in EURUSD.

After churning ground for a month in between the Greek election and the ratification of the bailout extension in the German parliament, the Euro finally chose a direction – lower – and ended four-weeks of obsolescence. EURNZD finished lower by -2.17%, EURGBP by -1.91%, and EURUSD by -1.65%, with the last posting its first weekly close below $1.1200 since September 2003. On the surface, market participants have completely looked past the short-term resolution to the Greek funding crisis and instead remain focused on the longer-term issues that could ultimately jettison Greece from the EMU.

At least two-thirds of the Troika don’t seem convinced that Greece has a detailed path forward (we realize that the Troika – the ECB, the EC, and the IMF – is no longer being called the Troika; but if you put lipstick on a pig, it’s still a pig). The ECB warned that “the commitments outlined by the authorities [of Greece] differ from existing programme commitments in a number of areas,” while the IMF posited concern over key areas, mainly labor market reforms, pensions, and VAT policy: “[the] Greek government [is] not conveying clear assurances that [it] intends to undertake the reforms envisaged.”

Whether or not the Greeks even accept the terms of the bailout extension are up in the air as well. Greek Prime Minister Alexis Tsipras is having trouble whipping up the votes in his Syriza party, and is said to be looking at other ways of ensuring the bailout extension (even if it means bypassing the parliament altogether). Just because Greece has kicked the can by four-months doesn’t mean that the country is out of the woods at all: the banking system remains in a state of plight. Bank deposits dropped by -€12.2 billion (-7.6% m/m) in January – the largest one-month drop since the data began tracking in 2011 – with another -€11 billion rumored gone in February.

Concern around the Greek banking system rather than the optimism over the loan extension is probably more important to the Euro’s underlying dynamic at this point in time. After all, Greece remains reliant on the ECB’s ELA, even though it’s possible the waiver for non-investment grade debt will be reinstated at the ECB’s second policy meeting of 2015 this Thursday. The larger, overarching concerns about Greece are in control right now, and any positivity in the short-term has been quickly faded in FX markets.

Speaking of the ECB meeting this week, it presents itself as both a placeholder and a weigh-station. As a placeholder, we already know that the ECB is moving forward with its QE program (the EAPP, Extended Asset Purchase Program) on March 15. Considering the processes by which the €60 billion/month program will be conducted have been faintly revealed, this meeting will bring from the shadows the procedures by which the ECB expects to proceed. Such details likely leave much wanting from traders looking for salacious information to operate around.

The crux of Thursday’s meeting, however, will come in the form of the updated economic projections. With energy prices low and the Euro weak, we expect both real GDP and inflation forecasts to be boosted in the future, mainly 2016 and 2017. While the 2015 real GDP forecast will probably be nudged higher, the 2015 inflation rate will likely not; the market’s reaction around the projections will be a good indicator of the direction of the Euro for the coming weeks.

The event will be a heat check for the ECB’s credibility, no doubt. If market participants believe in the ECB’s projections, then they will concurrently figure that the September 2016 end-date for the EAPP is also reasonable; otherwise, if a credibility gap presents itself, then traders might assume more easing must be done in the future for the ECB to achieve its mandate of price stability over the medium-term – something it has failed to do over the past four years. –CV