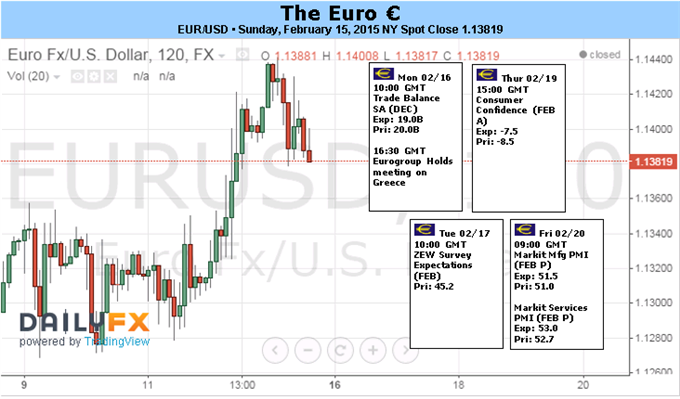 - Short positioning in the Euro is nearing a three-year high, and is a major hurdle for more downside.

- EURUSD initially coiled in a tight range to start the week, but its recent rally has pushed the USDOLLAR to a key level.

The Euro has fought through an onslaught of headline-driven negativity in recent days, and finished the second week of February higher against five of the other seven major currencies. By the end of the week, EURUSD closed up by +0.68% at $1.1382, and EURCHF – likely aided by shadow intervention by the Swiss National Bank – climbed higher by +1.26%. In a sense, the barometers of risk aversion for the Euro are fading, even against the backdrop of tense negotiations between the Troika and Greece.

By all accounts, it seems that Greece and the broader Euro-Zone are on a collision course: the Syriza-led government doesn’t seem ready to break its electoral promises to end austerity; and the German-led creditor bloc doesn’t seem ready to allow for debt forgiveness away from the current program. Officials are hopeful for some compromise, though: the European Central Bank has announced that it will expand its emergency liquidity assistance (ELA) by €5 billion to €65 billion.

As policymakers hash out the terms of Greece’s bailout going forward – be it a bridge loan, looser austerity conditions, etc. – it must be recognized that the recent uproar of perceived negativity about Greece hasn’t been supported by concern about the broader Euro-Zone. The Greek-German 10-year yield spread narrowed to 864.0-bps at the end of the week, well-below its post-Syriza victory high of 1049.0-bps. The Italian-Germany 10-year spread finished at 125.8-bps, below its six-month average of 140.5-bps; the Spanish-German equivalent closed at 120.2-bps, a touch above its six-month average of 119.8-bps. Contagion remains contained.

As it goes for the Euro, it seems that the conditions are primed for greater upside if it weren’t for the fly in the ointment that is Greece. The futures market remains heavily short, with 194.6K net-short contracts on the books, slightly off the 196.3K from the week prior, and still hovering near the all-tmie high of 214.4K set during the week ended June 5, 2012.

Given the macro backdrop, ahead of the ECB’s commencement of its QE program, it’s hard to envision that a positive, long-term resolution to the Greek crisis wouldn’t spur a short covering rally. Yet that remains the catch-22 of the whole situation: neither the Greek government nor the pan-European representation looks like they’re willing to compromise. Traders find themselves in the same conflicting position: sure, economic conditions around the Euro-Zone are beating consensus opinion, but the threat of an existential crisis to the Euro is too great a temptation to begin lifting their shorts from the market at present time. –CV