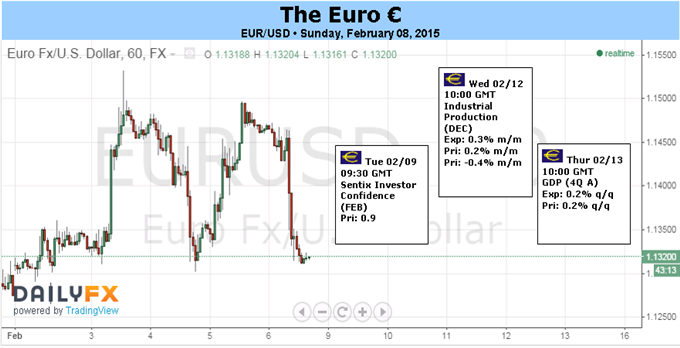 - February seasonality favors a slightly weaker Euro, but gains have materialized in three of the past four years.

- Risks to the Euro coming out of Greece started to intensify by the end of the week.

Markets continue to digest and process the meaning of Syriza’s ascent to power in Greece, and the Euro broadly stabilized last week as a result of this collective moment of reflection. EURUSD rebounded by +0.22% to close back above $1.1300, while EURJPY added +1.59% in what was a generally positive week for risk correlated assets. But it should be made clear, however, that that a dangerous ‘game of chicken’ is developing between Greece and her creditors; and that the perceived bullish nature of recent developments may only be temporary in nature.

The big development of the week was the European Central Bank’s decision to dismiss the waiver that allowed Greek bonds to be eligible for the Eurosystem’s refinancing operations (LTROs, TLTROs, etc.) despite being below what’s considered investment grade. If cheap capital and liquidity are the lifeblood of the Greek banking system, then the ECB’s move is a dangerous negotiating tactic.

By pushing Greek banks into the emergency liquidity assistance (ELA) facility, Greek banks are forced to rely on a more expensive form of funding to stay afloat – something that can’t and won’t last long as the ECB is prepared the pull the rug on February 25. The ECB is inherently forcing the Greek government to engage in pan-European negotiations – to kowtow to the demands of the Northern creditor bloc – in order to prevent the banking system from collapsing.

While an existential crisis for the Euro-Zone didn’t immediately develop after Syriza’s ascent to power, it should very much be on the radar. There are three possible outcomes: Greece’s Syriza leadership folds on its election promises, and pledges to keep prior governments’ agreements with Germany et al. in place; Greece refuses to respect its prior agreements, and the ECB nudges it out of the Eurosystem at the end of the month once the ELA is removed; or the creditor bloc backs down and provides Greece leniency.

None of these are exactly palatable outcomes, but the threat of Greece doing something dramatic may be the big reason why traders have been wholly ignoring fundamental developments elsewhere. The Citi Economic Surprise Index, a measure of economic momentum, rose to +24.8 by the end of the week, the highest since January 28, 2014 (+30.3). Medium-term inflation expectations (as measured by the 5-year, 5-year inflation swaps) have stabilized as well: the rate was 1.522% on January 9 and closed the past week at 1.615%.

Resolution to the Greek drama will be the only way for traders to take heed of the admittedly nascent signs of positivity out of the Euro-Zone, and only then will the extreme short positioning evident in the futures market be of material importance. At 196.3K net-short contracts, speculators are on the cusp of eclipsing the most bearish positioning ever, seen during the week ended June 5, 2012, at 214.4K net-short contracts. For now, positioning can build further, as traders lay down bets on the odds of a ‘Grexit’ increasing once again. –CV