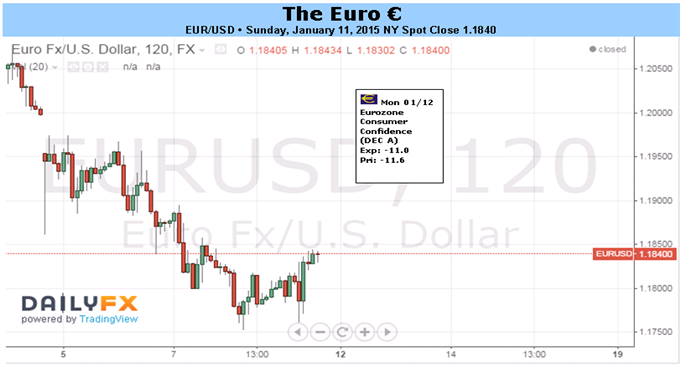 - EURUSD traded below $1.1800 this week as expectations for an ECB-sponsored QE program ratcheted up.

The Euro started off 2015 with a whimper, hitting the lowest levels in nine years below $1.1800 against the US Dollar. EURUSD closed on Friday with a five-day loss of -1.35%, finishing the week at $1.1840. Gains were absent on the 18-member currency, with losses in excess of -3% on the week in EURNZD (-3.14%) and in EURJPY (-3.06%). Between concerns over the stability of the Euro-Zone and speculation over what the European Central Bank might do next, the first week of the year may have laid the groundwork for a difficult 2015 for the Euro.

We’ve heard several times over the past few weeks that prominent ECB officials, including President Mario Draghi and Vice President Vitor Constancio, believe that expanding the ECB’s balance sheet back to its early-2012 levels will help revive the region’s plummeting inflation expectations and flagging credit growth. Consensus opinion right now would suggest that it’s become a baseline estimate of the market that the ECB is preparing to unleash a major QE program at is January 22 meeting, with sovereign bond purchases potentially included in the composition.

Along these lines, amid the Euro meltdown this past week, ECB President Draghi unveiled a new perspective on QE that may have contributed to the late-week stall in Euro selling: that a €500 billion package was being prepared, with leaks indicating that the size of the program could be “up to,” but not exceeding the €500 billion mark. This is of great consequence to Euro speculators: as recently as mid-December President Draghi was talking up a €1 trillion balance sheet expansion.

If the size of the ECB’s program proves to be below market expectations, there might be a ‘buy the rumor, sell the news’ opportunity around the corner, with the January 22 policy meeting and January 25 Greek elections just around the corner. Stretched positioning may contribute to a covering rally as well, now that liquidity has come back after the holiday period.

As market participants grapple with the expectations and consequences of said expectations around the late-January Euro-centric events, it may be worth taking a quantitative view on the situation, at least from a price perspective. Since the Euro’s inception in 1999, the Euro has closed each year in the direction of the first week’s close 13 of the 16 occurrences.

Euro bears may be encouraged by this outcome, as the prevailing backdrop of monetary policy divergence between the ECB and the Fed should be enough of a fundamental constraint to keep EURUSD pressured throughout 2015 – even if a brief short covering rally makes an appearance over the next few weeks. –CV