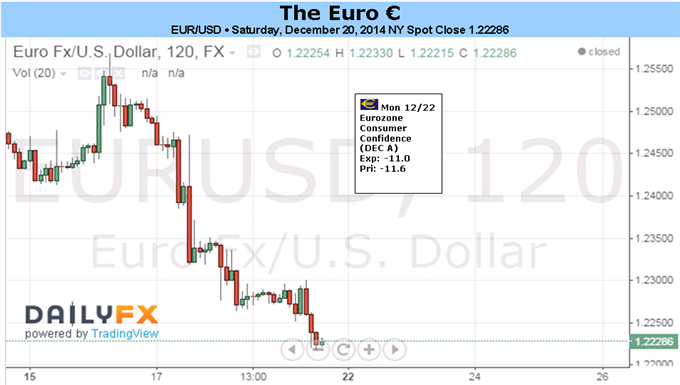 - EURUSD briefly traded over $1.2500 this week, but the Fed’s hawkish tone bolstered the greenback.

- Surprise SNB action has sparked a new speculative drive in the Euro – is the SNB front-running the ECB?

Amid new signs that a massive balance sheet expansion is on the horizon, the Euro plunged quickly in the second half of the week, finishing -1.91% lower versus the US Dollar by Friday’s close. The 18-member currency fell by more than -1% against all of its major counterparts (save the Swiss Franc; EURCHF +0.22% on the week), with EURJPY posting a -1.27% loss despite the ongoing strength in global equity markets. The recent wave of actions and comments from central bank officials inside and outside of the Euro-Zone is feeding into the narrative that the European Central Bank is about to embark on a new QE program.

It’s important to consider the role of the Swiss National Bank over the past several years: it has practically served as an adjunct branch of the ECB, ever since the SNB implemented the Sf1.2000 floor in EURCHF on September 6, 2011. Is it a coincidence, then, that as the ECB grapples with introducing a major QE program at its January 22 meeting and fears of a Russian currency crisis rise, that the SNB has taken steps to deter investors and speculators from fleeing to the Swiss Franc?

In a sense, the SNB’s introduction of negative interest rates for the first time since the 1970s serves as a measure to front run a massive balance sheet expansion by the ECB – this is an attempt to build a cushion against ECB QE-driven speculation that might threaten the EURCHF Sf1.2000 floor.

If the purported purpose of the SNB’s latest surprise actions seem conspiratorial, then comments made by ECB policymaker Benoit Couere may serve to affirm this speculation. Comments issued on December 16 suggests that a new easing program by the ECB is very near, with Mr. Couere saying that “there is a large consensus on the Governing Council to do more and we are now discussing the instruments to use.”

The time for the next wave of Euro weakness may be nearing, now that the futures market has been somewhat relieved of its stretched net-short Euro positions. Peak bearishness was evident in early-November, when traders were net-short to the tune of 179.0K contracts for the week ended November 4. As of December16, short positions had fallen to 126.6K contracts – a -29.3% reduction. The positioning shift gives reason for bears to believe in the downtrend: as short positions eased from November 4 to December 16, EURUSD only managed to recover by +0.28%.

Even as the holidays descending upon markets, with inflation expectations still falling (the 5Y5Y breakeven inflation rate closed the week at 1.366%, just off the yearly low set on December 17 at 1.298%), the ECB’s doves will only feel emboldened to bring forth a new easing program at the January 22 meeting. The next few weeks may be dicey with diminished liquidity conditions, but the stars are aligning for a rough start to 2015 for the Euro. –CV