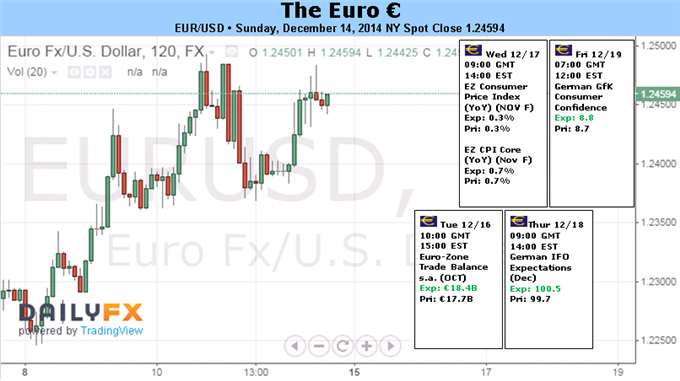 Positioning Unwind May be Driving Factor, Not QE, for Euro

- The technical prospects of a top in the US Dollar (vis-à-vis the USDOLLAR Index) have accumulated the past week.

- EURUSD and USDCHF wedges hint at possibility of bottoms in European FX starting to take shape.

The Euro stabilized in the second week of December, just a few days after hitting fresh yearly lows below $1.2250 against the US Dollar. EURUSD closed on Friday with a five-day gain of +1.44%, finishing the week at $1.2459. The 18-member currency only closed lower versus the Japanese Yen, with EURJPY declining by -0.81% to ¥147.95. Although chatter regarding a potential QE program from the European Central Bank has only increased in the wake of its December 4 meeting, the combination of year-end portfolio rebalancing and overstretched short positioning may be contributing to the recent rebound.

For several months, the futures market has been stretched with net-short Euro positions. Peak bearishness was evident in early-November, when traders were net-short to the tune of 179.0K contracts for the week ended November 4. As of December 9, short positions were being lifted, contributing to the recently choppy rate of decline, having eased to 136.9K contracts. Herein lies the longer-term hope for bears: even as short positions abated from November 4 to December 9, EURUSD has still managed to decline by -1.37%.

Even if any upward drift in recent days is the result of further short covering – something we won’t have definitive proof of until the next release of the CFTC’s Commitment of Traders report on December 19 – traders need to be aware of this threat into trading conditions around the holidays. Overarching fundamental themes of 2014 could lose gravitational pull on price as traders’ anxiety to close their books builds.

Although economic conditions have moved off the low, the Euro-Zone remains in an economic state on the verge of its third recession since the financial crisis began in 2008. The Citi Economic Surprise Index closed the week at -20.3, barely changed from the prior weekly close on Deecmber 5 at -21.4, and little changed overall over the past month, when the index was at -26.4 on November 14.

The greatest source of distress that should hold back market participants from helping the Euro set anything other than a short-term bottom is the ongoing pressure in medium-term inflation expectations. The 5Y5Y breakeven inflation swap, ECB President Mario Draghi’s purported preferred market measure of medium-term inflation expectations, slumped to a new yearly low. The gauge fell as low as 1.364% on Friday and closed the week at 1.377%.

With inflation expectations still disparingly low, the ECB’s doves will continue to chirp about a potential QE program, which should be a big enough threat to keep a major Euro rally from commencing. Several policymakers have stated their desire to see the ECB’s balance sheet move back towards its early-2012 levels (roughly €2.6 to €3.1 trillion), and there are few signs that the current measures are accomplishing just that: as of December 5, the ECB’s balance sheet stood at €2.04 trillion, barely higher than the €2.01 trillion it was three-months earlier. Euro bulls shouldn’t get too comfortable just yet. –CV