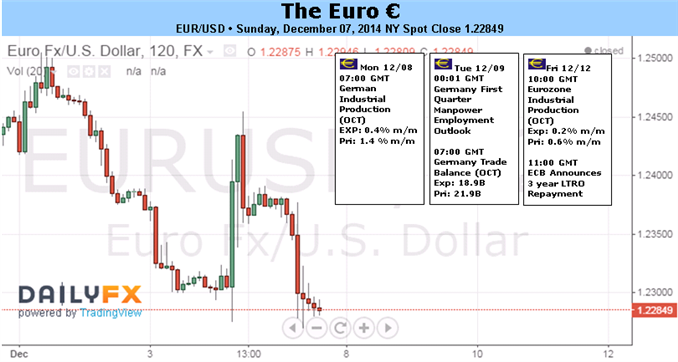 - EURUSD technicals turned more bearish after the ECB meeting, the US NFP release on Friday.

- December forex seasonality has favored a weaker EURUSD in the QE era.

The European Central Bank’s dovish tone at its final policy meeting of the year has paved way for speculation anew on forthcoming easing measures, sinking EURUSD to fresh yearly lows. The 18-member currency slipped by -1.36% against the US Dollar, closing the week at $1.2283, but not before dipping as low as $1.2271 in the process. The ECB didn’t need to employ a sovereign QE program like some were expecting in order to keep pressure on the Euro. Instead, as we discussed last week, the ECB is signaling it has other intentions.

The stated goal of ECB policy is to ensure price stability, but under the pretense of its current measures (interest rate corridor in negative territory, TLTROs, ABS-program), it is failing miserably in its attempts to lift inflation. The 5Y5Y inflation swaps, ECB President Draghi’s purported favorite market-measure of inflation, rebounded to 1.608% on Friday, after hitting as low as 1.429% on December 1. The ECB’s stated medium-term inflation target is ‘at or near +2%.’

We’ve heard several times over the past few weeks that prominent ECB officials, including President Mario Draghi and Vice President Vitor Constancio, believe that expanding the ECB’s balance sheet back to its early-2012 levels will help revive the region’s plummeting inflation expectations and flagging credit growth.

Acknowledging that the ECB has fallen short of its target, one might consider why this meeting lacked action. While market participants called for a Fed-styled, sovereign QE program, the ECB recognized it would be ineffective given the fact that peripheral yields have plummeted across the region. The ECB may have offered tacit acknowledgement that the central bank is moving closer to a QE program, but that doesn’t mean it has to be a sovereign QE program. A sovereign QE program would be just one possible route to achieve the desired end goal of lifting the balance sheet back towards its early-2012 levels.

What was at risk at the past meeting was the ECB’s credibility. With the second TLTRO allotment results due to be revealed on December 11, any new QE program ahead of the release – which wouldn’t have had support of a unanimous Governing Council – would: a) be equivalent to admitting the previous measures aren’t working; and b) have reset the clock on the ability to act in the future. By waiting until at least January, the ECB’s doves can avoid scuttling future ambitions as hawks demand additional time to let the measures work their way through the Euro-Zone.

If the current measures, the TLTROs and ABS-program, fail to begin lifting the ECB’s balance sheet back towards its early-2012 levels, (roughly €500B to €1 trillion greater than where it current stands), the ECB will assess whether or not it needs to engage in more aggressive easing policies in order to stoke growth and inflation as soon as the January 22 meeting.The last time a €1 trillion expansion happened, in the form of the LTROs in December 2011 and February 2012, the Euro suffered immensely against its major counterparts. This time, it’s not different. –CV