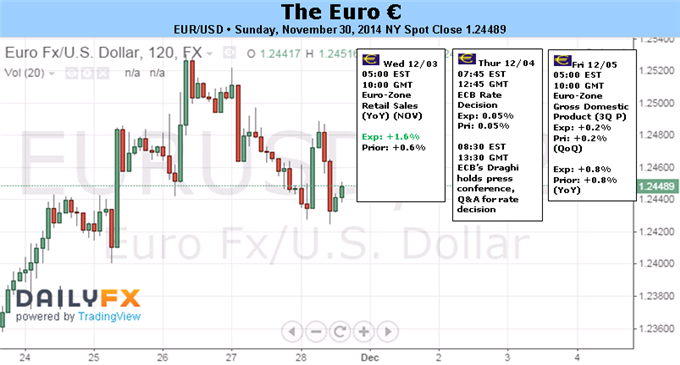 ECB to Retain Aggressive Dovish Tone Despite No Sovereign QE

- Dovish commentary from the ECB has kept a lid on any Euro short covering.

- PMIs, ECB meeting highlight a back-loaded economic calendar for the Euro this week.

The Euro was the worst performing major currency last week, racking up losses across the board as market participants retained their aggressively bearish bias ahead of then European Central Bank’s final policy meeting of the year. Amid heightened expectations of a new wave of easing, EURUSD slipped back by -0.49% to $1.2452, EURJPY fell by -1.19% to ¥147.72, and EURAUD, a carry trade candidate, was slammed by -2.37% to A$1.4639.

Comments made by ECB Vice President Vitor Constancio midweek paved the way for confidence anew among Euro bears. Piggybacking on ECB President Mario Draghi’s comments over the last month, ECB VP Constancio noted that “We [the ECB] expect that the adopted measures will lead, within the time of the program, the balance sheet to go back to the size it had in early-2012. If not, we will have to consider buying other assets, including sovereign bonds in the secondary market…” This comment is important for two reasons.

First, a sovereign QE program is very much on the table, at least in the minds of the ECB’s more dovish members. The reality of the situation in the Euro-Zone right now is that, while monetary policy can only do so much, there is absolutely zero thrust behind fiscal reform, leaving the impetus on the ECB to stoke growth and inflation in the region. Falling bond yields since mid-2012 have reduced pressure on the Euro-Zone’s most heavily indebted members – the immediate threat of a financial collapse reduces the need, in politicians’ minds, to move forward with unpopular deficit reducing measures.

The second point, and perhaps more important than the ECB’s potential willingness to do a sovereign QE program, is that they will not move forward with one until the measures currently on the table make their way through the system. ECB VP Constancio has said this much – that the ECB is waiting to see if the TLTROs and ABS-program lift the balance sheet back towards the early-2012 levels – only in the event that this does not occur will the ECB more seriously consider sovereign QE.

Inflation expectations remain the primary issue, which is why the Euro hasn’t been able to mount a full-scale recovery so far. The 5Y5Y inflation swaps, ECB President Draghi’s purported favorite market-measure of inflation, fell to a yearly closing low of 1.445% on Friday, having declined from 1.732% on November 1.

Due to incoming inflation data and persistently falling inflation expectations, policymakers have found it necessary to keep the door open for sovereign QE, despite the legal hurdles that remain, as Bundesbank President and hawkish ECB policymaker Jens Weidmann has pointed out. The threat of sovereign QE itself may not be driving the Euro right now, but rather the threat of the €1 trillion balance sheet expansion. The last time that happened, in the form of the LTROs in December 2011 and February 2012, the Euro suffered immensely against its major counterparts.

At a certain point thought, one has to wonder when the market will start to see ECB President Draghi as ‘the boy who cried wolf.’ If the ECB fails to convince market participants that a massive balance sheet expansion sheet is coming, it may be difficult to keep the Euro pinned lower for much longer: futures traders continue to hold a sizeable 168.7K net-short contracts, a veritable pile of tinder should Draghi & co. disappoint in the coming weeks: -CV