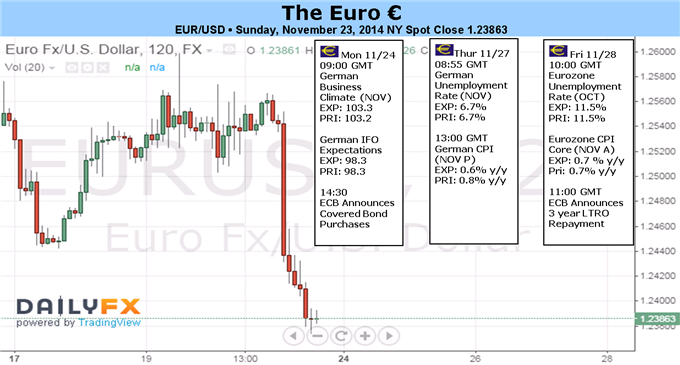 - Both EURGBP and EURUSD failed at important resistance this week, keeping the downtrends intact.

- ECB President Draghi’s dovish comments on Friday tipped the scales for the bears.

EURUSD fell back below $1.2400 by close last week after -1.08% swoon, as surprisingly dovish commentary from the European Central Bank president on Friday provoked the latest downdraft across the EUR-spectrum. The 18-member currency lost ground against all but two of the other seven major currencies, with minimal gains coming against the continually weak Japanese Yen (EURJPY +0.21% to ¥145.96) and the Swiss Franc (EURCHF +0.02% to Sf1.2016).

ECB President Mario Draghi’s comments in Frankfurt, Germany on Friday add fuel to the speculative fire that the ECB will unveil new stimulus measures at its December 4 meeting, at which time new ECB staff projections will be unveiled as well. President Draghi said that “We will do what we must to raise inflation and inflation expectations as fast as possible, as our price-stability mandate requires,” and that inflation expectations “have been declining to levels that I would deem excessively low.”

As discussed in the November 2 iteration of this article, “Once the recent measures pass through the market over the course of November, if the 5Y5Y swap rates don’t pick back up, the prospect for easing at the December policy meeting will have increased.” It seems we’ve crossed the threshold for more action.

In the lead up to the last ECB meeting, there was much speculation over the potential for new easing measures as well; but in lieu of the private infighting over President Draghi’s governing style and ensuing public affirmation of President Draghi’s policy stance, we’re led to believe that any commentary coming from the head of the ECB is genuinely indicative of the direction the central bank is moving, rather than just the opinion of one voting member.

The recent slip in Euro-Zone economic data momentum takes away what was one of the only weapons hawks brought to the ECB: that the recent stimulus measures (rates into negative territory, ABS-program initiation, and TLTROs) were doing enough in the short-term to justify the ECB holding out on new easing. After climbing as high as -15.0 on November 19, the Citi Economic Surprise Index dropped to -36.0 by the end of the week, highlighting how any improved Euro-Zone data is quickly moving into the background.

The prospect of further stimulus remains enough to keep Euro bulls at bay. If anything, Euro rallies are likely to be of the short covering variety, as non-commercials/speculators hold their net-shorts at 168.7K contracts. It’s also worth noting that the market is less saturated with shorts than earlier this year (179.0K contracts for the week ended November 4) or than it was in 2012 during the height of the Euro-Zone crisis (214.4K contracts for the week ended June 5). Positioning reveals that it’s possible we see a further buildup of short positions before a major low in EURUSD is established. –CV