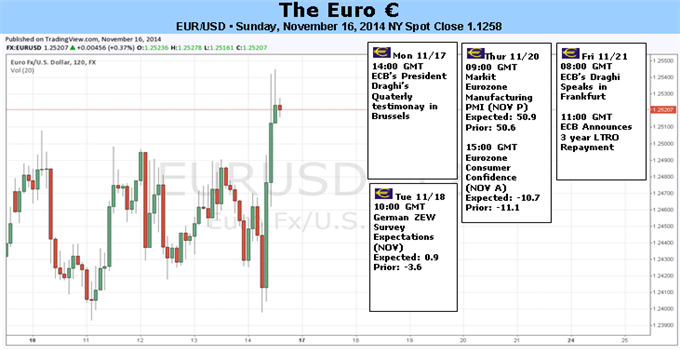 With risk appetite bolstered after the Bank of Japan’s latest round of easing, investors continued to shift capital into higher yielding assets this past week, and it translated into the Euro rallying against the lower yielding currencies while shedding some against the commodity bloc. EURJPY continued to impress, gaining another +2.00% to close at ¥145.66, and EURUSD was able to climb to a close of $1.2525 – after seeing prices below $1.2400 on Friday morning.

Much of the Euro’s stability against the British Pound, the Japanese Yen, and the US Dollar in recent days is due to the fact that Euro-Zone economic data hasn’t been so poor in recent weeks – we wouldn’t say ‘better,’ but rather ‘less worse,’ if you will. The Citi Economic Surprise Index, a proxy for economic data momentum, closed the week at -26.4, having recovered more than halfway from the yearly low of -57.3 set on October 14.

A closer look at this past week’s GDP data highlights why some of the figures are only ‘less worse.’ Q3’14 French GDP beat expectations at +0.3% q/q versus +0.1% q/q expected. However, the bulk of gains came from increased government spending (France needs to reduce its deficit, not add to it) and inventory growth. Inventory growth without matched consumption is essentially borrowing against future production: if inventories are stocked longer, it means that prices need to be cut to stoke demand or there is excess supply. Needless to say, France’s Q3 GDP figure was hollow at best.

Inflation expectations also remain an issue, which is why the Euro hasn’t been able to mount a full-scale recovery so far. The 5Y5Y inflation swaps, ECB President Draghi’s purported favorite market-measure of inflation, fell to a yearly closing low of 1.602%, but still have the yearly intraday low of 1.541% set on October 14. The breakdown of the October CPI report is important to note. Per the most recent headline HICP reading of +0.38% y/y, the energy subcomponent was -1.97%; headline HICP ex-energy would be +2.35% y/y. Prolonged weaker energy prices are a big reason why inflation continues to run below the ECB’s projections.

Looking to the week ahead, we’ll probably see more data that’s coming in a bit better than it was relative to a few months ago, but only being of the ‘not so bad’ variety. The German ZEW survey for November, particularly the Expectations sub-index, should be watched closely: it has collapsed spectacularly over the past year, from +62.0 in December 2013, to -3.6 in October. We’re interested because after 10 consecutive months of decline, the sub-index is expected to return into positive territory at +0.5.

Thursday’s November PMI data from across the region caps what is a week of minimal event risk for the Euro. The theme of reprieve is apparent in these data, too: the German readings are expected to edge a bit more positive in growth territory above the October readings, while the French figures are expected to improve but remain in contraction territory.

Positioning in the weeks ahead is key. Speculators/non-commercials reduced their extreme net-short Euro position for the first time in nearly two-months, having added to shorts every week since September 30. Down from 179.0K net-short contracts for the week ended November 11, the 163.9K net-short contracts remains a large, veritable source of tinder for the Euro to burn on a short covering rally. –CV