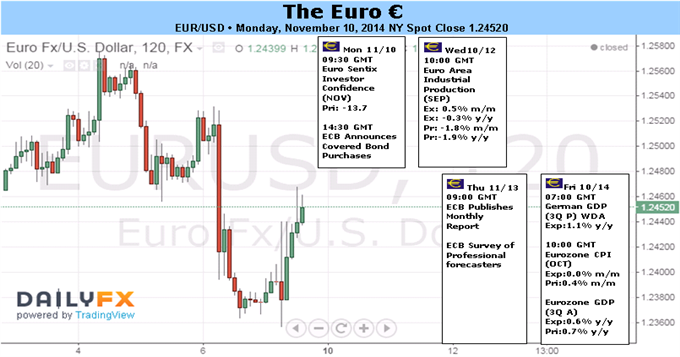 - The ECB sparked fresh yearly lows in EURUSD as December is eyed for a fresh round of stimulus.

After days of reports that discord was growing among European Central Bank policymakers, last week’s policy statement following the rate decision made clear that unanimity exists – and it’s led by the Mario Draghi, dovish contingent of central bankers. EURUSD’s slump to fresh yearly lows under $1.2400 comes up against the backdrop of the ongoing divergence between monetary policies across the pond.

Armed with fresh rhetoric suggesting that the ECB could announce a major easing program resulting in a massive expansion of the ECB’s balance sheet, Euro bears increased their short exposure to a near-two and a half year high at 179.0K net-short contracts, the highest level since the week ended June 12, 2012, at 195.2K contracts. Last week, we explored why we may see further extreme positioning readings in Euro before a tangible bottom is formed.

Policymakers find it necessary to keep the door open for more easing, which has become a veritable weight on the 18-member currency. ECB President Draghi’s big announcement this week was that the ECB could boost its balance sheet back to levels unseen since early-2012; this would roughly entail a €1 trillion expansion from current levels. The last time there was a €1 trillion stimulus wave – in the form of the LTROs in December 2011 and February 2012 – the Euro suffered immensely against its major counterparts.

While no major easing program has been thus far announced, the overhanging threat of additional stimulus, against the current economic backdrop, seems believable; rather, Euro-Zone economic data remains poor enough that the threat of imminent easing is believable. The Euro-Zone Citi Economic Surprise Index is holding at -32.4, off the yearly low of -57.3; relatively this is a disappointing, considering the US CESI is at +15.0.

The prospect of further stimulus, in the burgeoning era of BoJ- and ECB-led stimulus, now that the Fed is seemingly walking away from the game, might be enough to spook market participants from seriously engaging the Euro from the long side. Indeed, with the market still supersaturated with bears, there remains an ample pile of kindling left for a short covering rally – just not yet. –CV