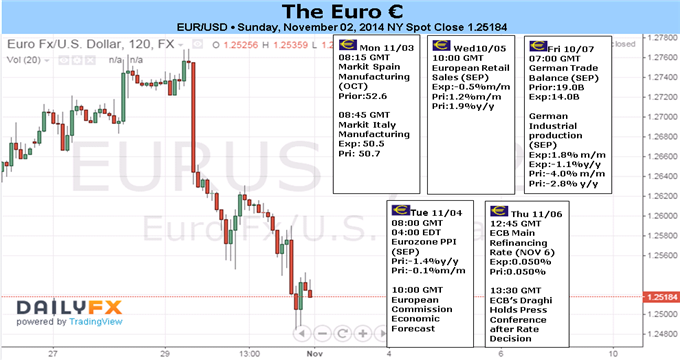 No QE This Week from ECB, but Prospect of Easing Haunts Euro

- The Euro slumped into month end, as the surprise JPY weakness dramatically shifted the landscape.

- ECB will retain a dovish tone this week, even if it doesn’t announce a sovereign QE program.

EURUSD slipped to fresh yearly lows last week, posting a -1.17% loss to close at $1.2525, as the surprise Bank of Japan stimulus announcement provoked a broad-based shift into USD. The 18-member currency lost ground against all but one of the other seven major currencies, with the lone gain coming against the berated Japanese Yen (EURJPY +2.58% to ¥140.68).

The BoJ’s actions bolster a theme that developed earlier in the week, when the Federal Reserve announced the end of its QE3 program and issued, according to most economists, what was a relatively hawkish statement: the liquidity baton is being passed from the Fed to the BoJ and the European Central Bank.

That being said, it is unlikely that the ECB offers up its own surprise to markets this week, when policymakers gather for the monthly rate decision on Thursday. The ECB is still waiting to see how its two recent easing measures, the TLTROs or the ABS-program, are picked up by market participants in the coming weeks. Policymakers may have some wind at their back, with German business confidence readings perking up, regional October PMIs surprising, and Euro-Zone inflation having ceased its decline.

Considering the precipitous drop in oil prices – the impact was restoring the “deflationary mindset” in Japan that provoked the BoJ’s surprise easing, and is part of the reason why, even though headline US price pressures are slumping, the Fed isn’t too concerned about falling inflation expectations – the ECB may too get a free pass from the market on low inflation expectations.

The 5Y5Y breakeven inflation swap, the European Central Bank’s preferred market measure of medium-term inflation expectations, are holding at 1.732%, above the yearly low set on October 15 at 1.541%, but off of the recent high set on October 23 at 1.836%. Once the recent measures pass through the market over the course of November, if the 5Y5Y swap rates don’t pick back up, the prospect for easing at the December policy meeting will have increased.

Even if the ECB holds and does not surprise with sovereign QE, the dovish tone can be underscored by ECB President Mario Draghi discussing potential corporate bond buying, a rumor that emerged in the interlude between the October and November policy meetings, and perhaps the intermediate step right before sovereign QE.

The prospect of further stimulus, in the burgeoning era of BoJ- and ECB-led stimulus, now that the Fed is seemingly walking away from the game, might be enough to spook market participants from seriously engaging the Euro from the long side. If anything, any Euro rallies are likely to be of the short covering variety, now that non-commercials/speculators have increased their net-shorts to 165.7K contracts, a 2014 high and the highest level since the week ended July 17, 2014 – the week before EURUSD bottomed in 2012. –CV