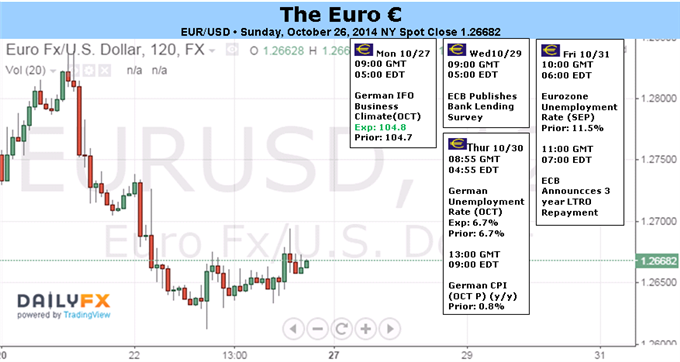 - The Euro’s performance has been broadly mixed the past month, but there are selective opportunities both long and short.

- EURUSD may be setting a higher low as the economic data drought ended with surprise German, EZ PMIs.

The Euro continued its process of stabilization for the third consecutive week, although a slightly more negative tone was apparent in the run up to the release of the European Central Bank’s asset quality review (AQR, stress tests) The 18-member currency posted gains against only two of the major currencies covered by DailyFX Research, with EURUSD falling by -0.71% to $1.2671. A culmination of factors over the last few days and weeks may be gathering for Euro strength in the near-term

Aided by much better than expected preliminary October German and Euro-Zone PMI data, gauges tracking Euro-Zone economic momentum have turned sharply higher from their lowest levels of the year. While the yearly low was set on October 14 at -57.3, the Citi Economic Surprise Index shot up to -36.8 by the end of this past week. Relatively speaking, data has been less disappointing and even positive in select cases.

Following the small improvement in data momentum, medium-term inflation expectations rebounded slightly this week as well. The 5Y5Y breakeven inflation swap, the European Central Bank’s preferred market measure of medium-term inflation expectations, edged higher from 1.779% to 1.791% - not a terrific rebound, but still moving in the direction the ECB’s policy is hoping for. The yearly low was set on October 15 at 1.541%.

These improving economic data trends are now bolstered by what should be considered a better than expected round of stress test results. The AQR was released on Sunday at 12 CET, and showed that while 25 Euro-Zone banks failed the tests totaling €24.2B in capital shortfall, 12 banks have already raised enough capital to cover their respective shortfalls.

The total shortfall after the 12 banks raised capital fell to €9.5B – a much more manageable figure. Various banks’ estimates pegged the cumulative shortfall from anywhere to low tens of billions to as high as €100B.

If there was ever a chance for the Euro to take advantage of near-term conditions, the moment may be ripe for the elusive Euro short covering rally. The fuel here, of course, is the stretched futures market positioning. Non-commercials/specs held 159.4K net-short contracts for the week ended October 21, an increase from the 155.3K net-short contracts held a week earlier.

Outside of the very immediate time horizon, the outlook is still fairly bearish: sovereign QE is still widely expected from the ECB next year while other major central banks (BoE, Fed) winddown their expansive stimulus policies. –CV