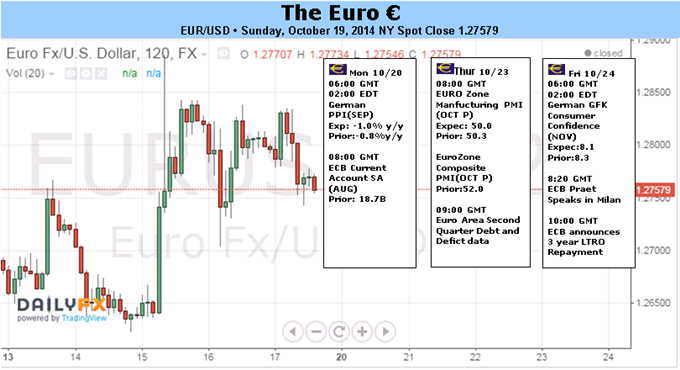 - The Euro may have its own problems, but it may be able to lever the US Dollar’s moment of vulnerability.

- The retail crowd’s shift in the US Dollar is led by what could be a bottom forming in EURUSD led by sentiment.

The Euro broadly stabilized for the second straight week, posting a +1.09% gain against the US Dollar, with the EURUSD exchange rate closing at $1.2761 on Friday. The 18-member currency gained against all but two of the other seven major currencies, with minor gains rewarded to the Swiss Franc (EURCHF -0.09%) and the New Zealand Dollar (EURNZD -0.31%). Concerns over the region’s growth prospects continue to linger, but they haven’t produced further downside yet in the Euro.

Although economic conditions have moved off the low, the Euro-Zone remains in an economic state on the verge of its third recession since the financial crisis began in 2008. The Citi Economic Surprise Index closed the week at -54.1, barely off the yearly low established on October 14 at -57.3.

What’s particularly interesting about this recent mix of financial and economic conditions is that the Euro hasn’t been depreciating. EURUSD is nearly 300-pips off of its early-October low, and the futures market remains saturated with aggressively short speculators. Non-commercials/specs held 155.3K net-short contracts for the week ended October 14, an increase from the 146.2K net-short contracts held a week earlier. Still, market positioning is off its extreme seen in early-September, when specs held 161.4K net-short contracts.

There is latent potential, then, if the Euro is braving weakening conditions and a buildup of short positions, for a short covering rally. One could develop as the US Dollar faces its own moment of vulnerability, or if incoming economic data doesn’t disappoint market expectations too greatly. The week is packed with typically market-moving PMI releases. Overall, further weakness is anticipated in the broader Euro-Zone indicators due to drag originating out of France and Germany.

The scope of the incoming recession to the Euro-Zone’s largest economy will be in particular focus, as the preliminary October German Manufacturing PMI is expected to decrease further to 49.6, indicating a heightened pace of contraction. The weak reading should reflect not only weakening domestic demand but also softer foreign demand, from Euro-Zone and emerging market partners alike. This means that any economic weakness forthcoming may be beyond the current scope of the ECB’s measures.

If the table is getting set for a Fed-styled, sovereign QE program to bolster the ECB’s easing stance, then that too will have to wait: the market is eagerly awaiting the ECB to release the results of the asset quality review (AQR) on Sunday. –CV