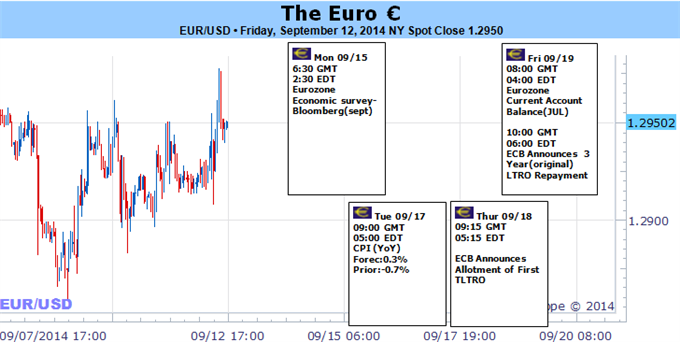 Euro selling pressure appears to be waning at last after eight consecutive weeks of losses that brought the single currency to the lowest level in 14 months against the US Dollar. The operative question going forward is whether this precedes a period of consolidation before a reinvigorated push downward or a correction upward. The answer will be found in the markets’ response to a hefty dose of high-profile event risk on the domestic and the external fronts in the week ahead.

Looking inward, thespotlight is on the first ECB TLTRO operation due to be held on September 18. The effort represents one of many easing tools that Mario Draghi and company have deployed in recent months in an attempt to check the slide toward deflation and repair the seemingly broken monetary policy transmission mechanism that has made the central bank’s prior attempts at stimulus largely ineffective. The scheme envisions offering Eurozone banks cheap capital tied up with conditions pushing them re-lend it while passing on low borrowing costs to the real economy, stoking activity and boosting prices.

The key variable in play will be the size of the liquidity provision that is ultimately taken up by banks tapping the facility. In a somewhat counter-intuitive turn of events, a large capital allocation seems likely to offer support to the Euro. The ECB has seemingly done everything it could muster in terms of expanding accommodative monetary policy without embarking on “classic” QE: the purchase of sovereign debt with newly minted money. Indeed, the TLTRO effort will be aided by a record-low baseline lending rate, a negative deposit rate, as well as purchases of asset-backed securities and covered bonds.

With that in mind, strong uptake on the TLTRO operation may be seen as giving policymakers a bit of breathing room to shift into wait-and-see mode without feeling pressure to do more, a move that could prove functionally difficult given strong opposition from the likes of Germany and undermine the ECB’s credibility. That may in turn fuel speculation that single currency has fallen substantially enough to price in the degree of easing already on the table, prompting a round of profit-taking on highly elevated speculative short positions and sending the common unit upward.

Externally, the first major item of note is the FOMC policy announcement. September’s outing will be accompanied by the release of an updated set of forecasts for key metrics of US economic activity as well as press conference from Chair Janet Yellen. The Fed has long warned about complacently buoyant risk appetite as the end of QE3 looms ahead next month. If policymakers opt to shake things loose with upbeat activity projections and/or a hawkish outing from Ms Yellen, this may put the Euro’s increasingly unattractive yield profile in stark relief and reinvigorate bearish momentum.

The second is the Scottish Independence referendum. Opinion polls ahead of the ballot essentially point to a 50/50 chance that Scotland will secede from the UK. This implies that – whatever the final result – a surge of volatility is likely to follow the results as those on the wrong side of the outcome are forced to readjust positions. A final vote in favor of independence is likely weigh on Sterling, sending capital fleeing to alternatives. The Euro looks like a natural beneficiary in such a scenario. Needless to say, a victory for the “no” campaign will probably yield the opposite result. – IS