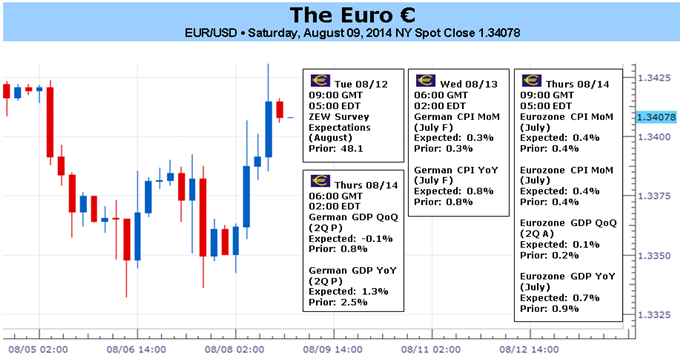 - The Euro was weighed down by surprising data that showed Italy reentered its recession.

- A lack of dovish clarity from the ECB may have set the Euro up for a short squeeze.

A lack of concrete dovishness from the European Central Bank alongside a lack of military developments in Eastern Europe paved the way for another week of relative stability for the Euro.The 18-member currency finished squarely in the middle of the pack, slipping slightly to the top performing Japanese Yen (EURJPY -0.69% to ¥136.83), while EURUSD barely edged lower (-0.13% to $1.3414).

The impact of the ECB’s June easing measures is starting to materialize, at least from the financial conditions perspective. The overnight interbank lending rate (EONIA) is firmly holding near zero, at 0.014%. Excess liquidity in the Euro-Zone has stabilized as well, ending the week at €131.5B, near the 20-SMA of €130B. Truly, with sovereign yields across the region holding at or near all-time lows, it’s the Euro-Zone’s weak growth picture that’s holding back the Euro.

One might consider that economic data in the Euro-Zone has started to steady in recent weeks. The Citi Economic Surprise Index closed the week at -31.9, above the July and yearly low set on July 21 of -43.3. On a relative basis, this reading is less impressive. Indexing all of the major currencies’ CESIs to 100 at the start of 2014, EUR has the second worst economic data momentum among the majors at 24.46, barely beating out the lowly JPY reading of 20.98.

The failed economic liftoff over the past several months in conjunction with swelling geopolitical fears has proved negative for riskier Euro-Zone financial instruments as well, not just the Euro. The German DAX is down by -8.73% from its highest level over the past month, and closed the week down -10.36% from its all-time high set on June 20.