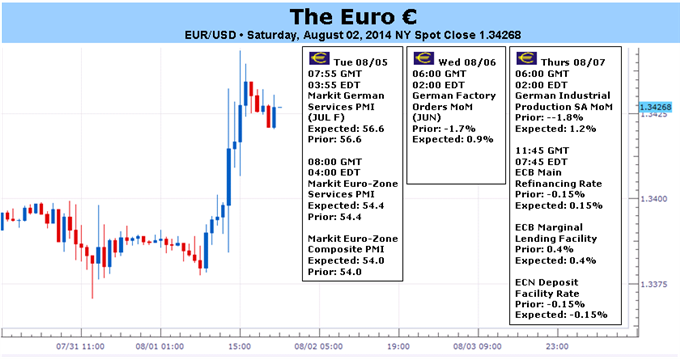 - EURAUD, EURGBP, and EURJPY warned of a potential Euro rebound by Tuesday.

Despite its own issues beginning to crop up, the Euro was able to post a rebound across the board over the past five days (but for in EURUSD, -0.02%). A rather barren economic docket combined with exogenous factors proving more worrisome for the other major currencies gave way for the 18-member currency to pump the brakes on its recent decline ahead of the European Central Bank’s August policy meeting.

The first week of the month typically brings about significant economic data, and this first full week of August is no different. On Tuesday, the final July Euro-Zone PMI Composite (54.0 expected unch.), final July Euro-Zone PMI Services (54.4 expected unch.), and June Euro-Zone Retail Sales (+0.5% expected from 0.0% (m/m), +1.4% expected from +0.7% (y/y)) are due. All the data point to a modest pace of growth in the Euro-Zone midyear, nothing to be excited nor dismayed about.

Economic data in the Euro-Zone has started to steady in recent weeks, as evidenced by the sharp rebound in the Citi Economic Surprise Index, which closed the week at -24.9, well-above the July and yearly low set on July 21 of -43.3. Yet even as the European Central Bank meets on Thursday for their August policy meeting, it is unlikely that an optimistic tone regarding the region’s growth prospects is sounded too loudly: inflation stubbornly remains on a downward trajectory.

In recent weeks, ECB officials have highlighted the importance of the inflation cog in the ECB decision making mechanism. On July 16, Benoit Coeure said "Given low inflation today in Europe still being far away from our target of price stability, there is a view on the Governing Council that rates will stay low for an extended period of time." German representative and Bundesbank President Jens Weidmann noted on July 18 that "the task now is to prevent an excessively long period of low inflation. Because that could paralyse the euro area's economy.”

Given the state of affairs in the region it is likely that the ECB meeting this week offers no clear path forward. On one hand, the constant nature of low inflation is obviously concerning. On the other hand, ECB policymakers still would like to avoid introducing any new substantive measures while the banking stress tests are being processed, keeping any realistic shot of QE during a non-crisis period of on hold until at least after October.

The ECB meeting this week, then, absent of any real action, will at least bring along with it a rather dovish slant from Governor Mario Draghi at the post-meeting press conference. The specter of QE will be fleshed out, but without any specific details that would indicate QE is due in the immediate future. A lack of heightened dovishness will probably provoke a short-term squeeze in the Euro, where non-commercials/speculators have increased net-short positions (108K contracts) to their highest levels since the week ended August 21, 2012 (124K contracts). –CV