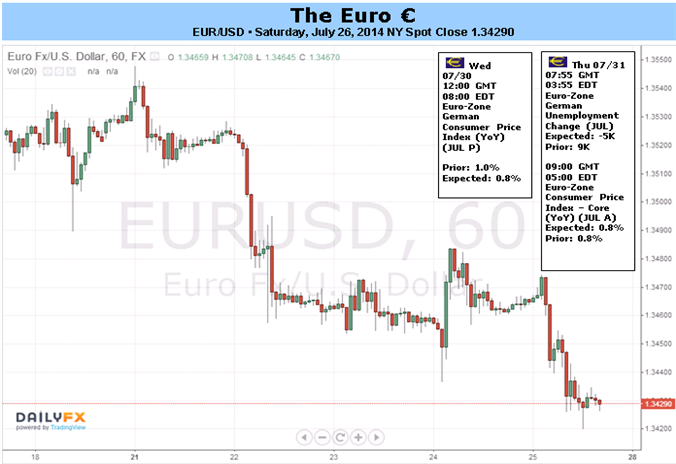 - The Euro’s bearish technical structure has been in place since July 11, with EURJPY and EURUSD.

- Despite better than expected PMIs, the Euro failed to capitalize on signs of improved growth.

It was another week of generally low volatility in spot FX markets, although there were early signs of some life coming back into Euro rates markets. Despite all of the majors trading within a +/-1% range against the 18-member currency, the gyrations in EURAUD (-0.76%) and EURUSD (-0.70%) didn’t go unnoticed, and the early stages of a broader-based Euro decline may starting to come alive (just don’t look at EURNZD, which rallied by +0.84% due to NZD-centric reasons).

Whereas positive-biased surprises on the economic data front have previously provoked short-covering rallies in EUR-based pairs, this past week there was a noticeable lack of enthusiasm even when the most important data of the week, the Euro-Zone, German, and French PMI surveys, beat expectations across the board. The July Euro-Zone Composite PMI survey improved to 54 from 52.8, while the July German Composite PMI improved to 55.9 from 54.

These readings don’t necessarily point to a fast growing economy, as Q1 and Q2 Euro-Zone Composite PMI averages were at 53.1 and 53.4, leading to only +0.2% growth in Q1 on a quarterly basis (Q2 GDP data is due on August 14, and a Bloomberg News survey forecast quarterly growth of +0.3%). Instead, the market was seemingly focused on the weak inflation component (output prices) of the Euro-Zone Composite PMI, which came in below 50 again, where it’s been since April 2012. The reading below 50 suggests that disinflation, contracting prices, remains an issue.

With the market squarely focused on inflation, the Q2 Spanish GDP report due on Wednesday might be overlooked entirely, barring a significant deviation from estimates (expected +0.4% q/q unch). The market cares more about inflation ever since the liquidity environment of the Euro-Zone was ‘smoothed over,’ as the EONIA rate is stable at +0.042%.

The Thursday release of the July Euro-Zone Consumer Price Index will show that the European Central Bank’s latest easing measures have had little impact so far, leaving the picture gloomy for the Euro. Headline inflation is expected unchanged at +0.5% y/y, and core inflation is due at +0.8% y/y. These points fit neatly with the narrative of generally disappointing Euro-zone data recently, as the Citi Economic Surprise Index has fallen to -36.2, just above the yearly low of -43.3 set on July 21.

The coming days should test the market’s mettle for the weak growth, disinflationary environment gripping the region, as calls for non-standard easing measures have started to grow. While policymakers have long-indicated that they want to wait until the stress tests conclude in the fall before introducing anything major, only a continued slog through the growth rut would prompt additional dovish action. The time for more action may be nearing. –CV