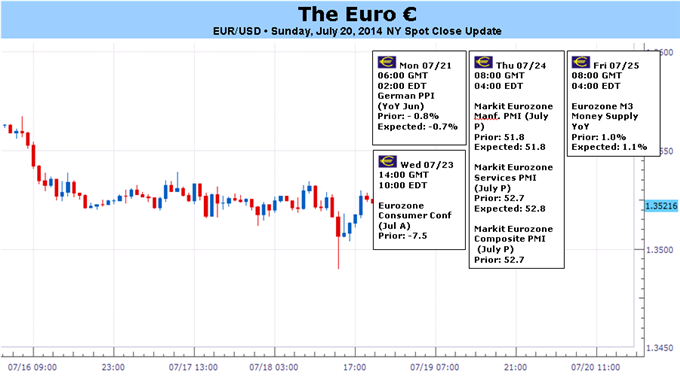 Euro Starts to Slip Under Weight of Falling Inflation Expectations

- The daily sell signals seen in EURJPY and EURUSD on July 11 started to play out bearishly.

The Euro’s price movement this past week by no means screams ‘the period of low volatility has ended!’ but there are definitely signs of markets coming unstuck. The 18-member currency was broadly under pressure over the past five days, losing ground to all of the majors but for the CHF (+0.08%) and NZD (+0.78%); against the five other majors, the Euro’s losses ranged from -0.46% (GBP) to -0.63% (CAD). Still, there hasn’t been one definitive event to kick off the latest round of Euro weakness.

The outside pressures that may be dragging down the Euro by proxy – vis-à-vis the Euro’s pairings with the British Pound and the US Dollar – are still the most prevalent influences on the EUR-complex. The Bank of England’s low interest rate policy may start to come under more pressure now that inflation readings have started to pick back up, while the Federal Reserve may be closing in on the end of QE3 sooner than market participants have priced in.

The influence of the Euro’s own central bank is very much in flux. One perspective dictates that the European Central Bank has opened up the floodgates for monetary easing, by lowering the interest rate corridor into negative territory and promising targeted liquidity measures (TLTROs) to ease credit conditions for small- and medium-sized enterprises. Another perspective says that the ECB has already reached the end of its easing capabilities so long as debt crisis fears stay capped during the banking system stress test period (through the end of October).

While we feel that any chance of a full-blown, Fed-styled QE program is unlikely in the near-term (hence the only limited downside in the EUR-complex after the ECB’s June and July meetings), we must be acutely in tune with the inflation environment. The ECB has made it clear, through its official policy transmissions and various policy speeches from Governing Council members, that only further erosion in the region’s price environment would warrant additional easing action over the coming months.

Now that inflation expectations are falling, additional evidence of slowed growth can compound the issues facing the Euro in the near-term. This coming week, preliminary July PMI surveys out of France, Germany, Italy, and the broader Euro-Zone are expected to show a slowed pace of growth from the prior month, perhaps supporting the developing trend seen in German inflation expectations for 2014, 2015, and 2016. While we anticipate exogenous influences maintaining their clout with respect to the Euro, we shouldn’t be dazed by the low volatility state persisting in spot FX markets, as more local influences are starting to exert themselves on the Euro once again. –CV