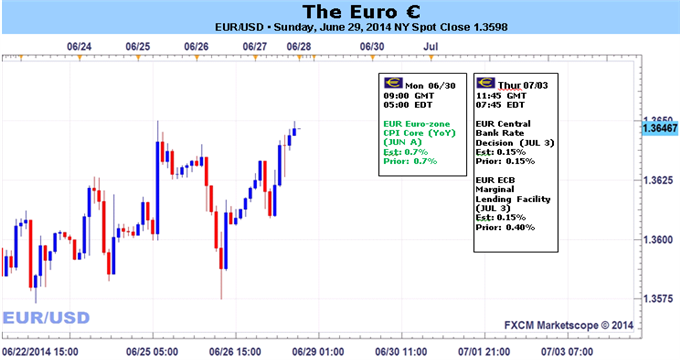 - EURGBP,EURJPY, and EURUSD are all at important technical crossroads ahead of the ECB meeting.

- The retail trading crowd ended the week net-short EURUSD, which we observe in a contrarian light.

More modest erosion in the EUR-complex although EURUSD continues to surprise, as the US Dollar’s own issues are preventing it from finding a veritable launching point. In the current yield hungry environment, the Euro, with its negative deposit rate of -0.1% thanks to the European Central Bank at its last meeting, has seemingly taken on a pseudo-funding currency role, having continuously declined against the commodity and emerging market currencies since early-June.

Whereas the June ECB meeting provided the catalyst necessary to provoke Euro movement once more – even if not against the US Dollar, against many of the other majors – this incoming meeting is more or less a check point in between major meetings, rather than the final destination sought after.

Per the ECB’s June meeting, a new interest rate regime was introduced, enhanced liquidity measures unrolled, and strengthened forward guidance unveiled. Considering that there hasn’t been nearly enough time for the rate cuts to make their way through the Euro-Zone economy and have an observable impact, the ECB will do little if anything along this front. Further to this point, recent June German core inflation numbers have exceeded expectations at +1.0% y/y from +0.6% y/y, underscoring the Governing Council-wide sentiment that prolonged low inflation, not necessarily deflation, is a risk.

The ECB will not take on anything more than a tone of guarded optimism, as simply not enough time has elapsed to declare victory or elsewise with respect to bringing the region back from the economic edge. To this end, the other aspects of the ECB’s June policy changes will be elaborated further on.

In terms of liquidity, greater detail should go into how the TLTROS (targeted LTROs) will be conducted. With the conditions to access the TLTROs likely to be a few low hurdles – the goal is to make flow of capital and credit creation easier, not harder – the Euro-Zone economy should see a tangible benefit resulting from these stimulus measures by the end of the year.

Forward guidance remains the easiest aspect of policy for the ECB to control, now that ABS purchases or a variation of QE is on the table should the inflation environment deteriorate further. That said, as we already mentioned in this article, recent inflation figures are moving higher, meaning the chance for large-scale asset purchases at this stage of the game is all but impossible.

We conclude with poignant commentary once again: "[QE] is possible, it is in the toolbox, but it isn't needed today," ECB executive board member Benoît Coeuré said on Friday, June 20. "We've been clear that in case inflation would be too low for too long, we can use additional instruments, including additional non-standard measures…"But we're not in that situation today. So I think there is no disagreement with the IMF." Some more pseudo-optimistic commentary from the ECB this week and the EURUSD could very well be on its way back into the $1.3700s. –CV