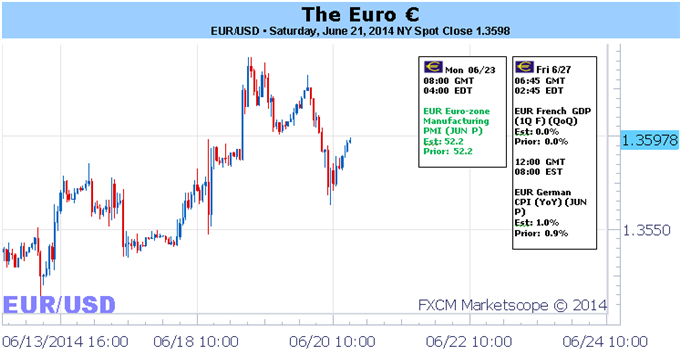 - The Euro was teetering on the edge of greater decline, but the Fed stunted EURUSD’s decline.

- By Friday morning, the retail forex crowd had flipped to net-short EURUSD.

The Euro has seen little knock-on ramifications resulting from the European Central Bank’s June policy meeting, and settled the week in a +/-0.50% range against six of the other seven major currencies (but for EURAUD, which appreciated by +0.59%). Driven by a weaker US Dollar in the immediate hours of the Federal Reserve policy meeting this week, EURUSD was able to settle back above its pre-ECB range lows of $1.3585, signaling that the market isn’t quite ready to offer the Euro lower just yet.

There are several factors in play that are helping keep EURUSD buoyed, and as a result, the broader EUR-complex. With US yields still low and only recently starting to show a tendency to drift higher, the US Dollar still isn’t positioned to be seen as a risk-adjusted viable alternative to the Euro. Case and point: Italian and Spanish yields have lurched lower in recent weeks, as investors seek yield and see the ECB’s implicit backstop as more or less eliminating credit risk.

Further to this point, the Euro has stayed elevated as EONIA rates have plunged. The overnight interbank lending rate slumped to 0.01% by the end of the week, in line with the ECB’s efforts to narrow the interest rate corridor by dropping the lower bound into negative territory.

Liquidity is seen as plentiful and risk is seen as a distant likelihood, continually driving real money into the Euro-Zone (which has been an ongoing process over the past several months and years). Look no further than the core/Northern Euro-Zone countries’ growing current account surpluses.

With European bond yields falling (prices rising), equities prices rising, and the Euro staying elevated in the wake of the ECB meeting, we can at least surmise that investors aren’t abandoning the region wholesale even as a negative interest rate regime sweeps across the region. Market participants are more interested in the developing price environment, as that will ultimately be the determinant of what the ECB does next.

June German inflation data at the end of the week, which should show a modest improvement after the May monthly deflation and yearly disinflation figures, should be paid particular attention to as the ECB has made clear that any additional easing will only come if the inflation outlook deteriorates further.

"[QE] is possible, it is in the toolbox, but it isn't needed today," ECB executive board member Benoît Coeuré said on Friday. "We've been clear that in case inflation would be too low for too long, we can use additional instruments, including additional non-standard measures…"But we're not in that situation today. So I think there is no disagreement with the IMF." We’ll take the ECB at its word – and we’ll be watching the Euro intently over the coming days to measure the like likelihood of additional ECB action. –CV