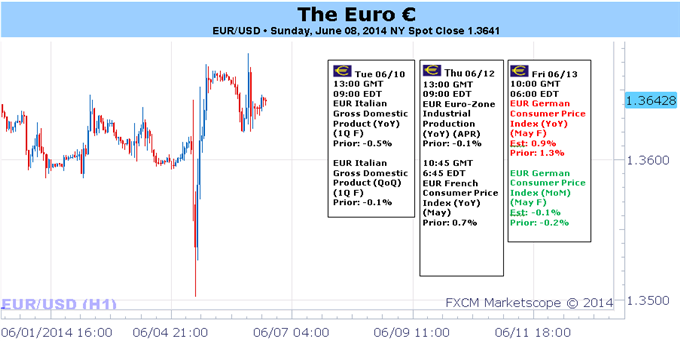 - The Euro’s technical posture improved after the ECB meeting, but the spot-on US NFPsproduced limited follow through.

- Still, June has proven to be a seasonally strong month for the Euro, at least in the QE era.

The European Central Bank, after weeks of rampant speculation, delivered on its promise made on May 8 for substantive policy action. Yet, the duration and depth of the impact on the Euro has proven thus very limited, raising the question: did the ECB do enough? The Euro ended the week down only against three of the major currencies, while posting meager gains against the other four. Evidently, the market is taking the ECB’s actions as a sign that they’re willing to do what is necessary to help spur lending and ultimately growth in the region; but not necessarily weaken the Euro.

The breadth of ECB action was plentiful, insofar as there were many changes to various aspects of the ECB’s current accommodative monetary program. Everything that was speculated upon in the weeks leading up to the June meeting ended up panning out. The notable changes, to wit:

- Liquidity: No more 1-month LTRO, but SMP holdings will no longer be sterilized after the June 10 auction; TLTRO (Targeted LTRO, the ECB’s version of the Bank of England’s Funding for Lending Scheme (FLS)) for up to four years. The SMP unsterilization will boost excess liquidity in the Euro-Zone by about €160B.

The efforts made by the ECB are established across all fronts, from traditional easing steps to non-standard measures. There were two definitive steps taken, however, that can be pointed to as perhaps viable reasons why the Euro didn’t endure a greater decline around the ECB’s meeting on Thursday. First, the ECB’s updated its expected EURUSD exchange rate over its forecast horizon to $1.3800 from $1.3600. Second, President Mario Draghi said in his Q&A that the ECB’s rates were essentially ‘at the lower bound’.

What these slight tweaks to the ECB’s policies equate to is that, at current time, there is no real imperative to speculate that the ECB could cut rates further. Additionally, it means that the EURUSD (at $1.3641 at the end of the week) is below the ECB’s expected exchange rate. Going forward, the market will pay less attention to the ECB – that is unless economic data weakens to the point that further action may be necessary. Visit the DailyFX Economic Calendar to see what data will be in the Euro driver seat this week. –CV