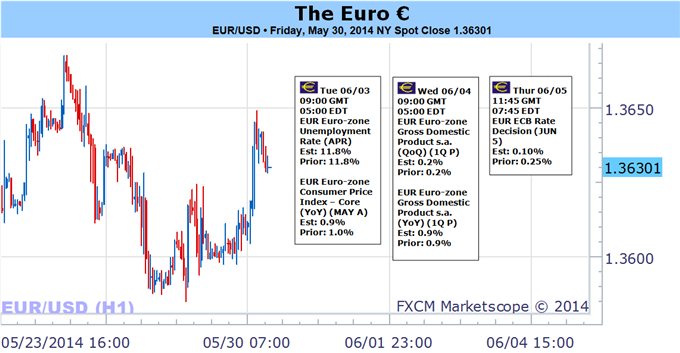 Traders Betting Big on Euro Losses, but Caution Warranted Ahead

The Euro showed signs of life as it bounced off of fresh multi-month lows and ended a three-week losing streak. Yet traders await a critical European Central Bank interest rate decision to drive volatility in the week ahead.

Recent futures data showed large speculators headed into the week at their most short Euro since it bottomed in July of last year. Traders were likely increasing their bets on Euro weakness as the ECB is widely expected to cut interest rates in their coming meeting. Expectations often beget disappointments, however, and a rush towards Euro selling warns that the single currency may bounce on any ECB surprises.

All eyes turn to central bank President Mario Draghi as he said the ECB was “ready to act” at its next meeting. A Bloomberg News survey shows the majority of economists polled believe the bank will cut its Main Refinancing Rate to further record-lows and push its Deposit rate into negative territory. If the ECB fails to cut either rate it seems obvious that the Euro might rally. Beyond that, however, likely outcomes seem much less clear.

Derivatives traders have pushed forex volatility prices near record-lows across the majority of US Dollar and Japanese Yen pairs. And yet EURUSD 1-week prices have spiked near their highest levels of the year.

Any unexpected results from the European Central Bank would likely be the catalyst for important Euro moves, while end-of-week US Nonfarm Payrolls data could likewise spark significant EURUSD swings. – DR