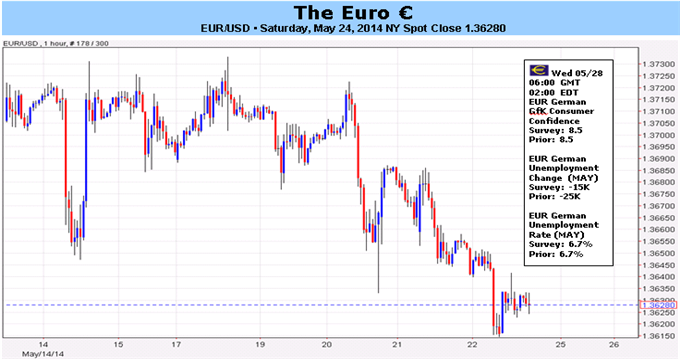 - The Euro is being pressured by the ECB’s policy pivot, and is currently in ‘sell rallies’ mode.

- The retail trading crowd flipped net-long EURUSD for the first time since July 2013.

An old trader adage goes, ‘sell in May, and go away,’ speaking to the seasonal tendency of risk-correlated markets to weaken through the summer months. Yet with central banks continuing to goose short-term interest rate markets in an effort to keep liquidity plentiful, bond yields have plummeted, spreads have collapsed, and as a result, volatility has all but disappeared. In light of the Euro’s recent performance, which was nothing short of muted the past five days, perhaps a different memo was being passed about this year: ‘sleep in May and snore away.’

Far from an exaggeration, you might consider that one-month EURUSD implied volatility is only 6.025%, barely above the yearly low of 4.953% set on May 2. So, while volatility has risen, it is still exceptionally low; you have to go back to the summer of 2007 to find the last time one-month EURUSD implied volatility has been so pegged at such low levels. These developments come against the backdrop of the European Central Bank threatening to unleash non-standard, and perhaps, unprecedented easing measures at its meeting in June.

In a sense then, the current spell of diminished volatility can be partially tied to traders waiting to see what the ECB will do. Even as the Euro has fallen from a yearly high of $1.3993 on May 8, two views of swaps markets suggest that additional accommodative action isn’t fully priced-in. Credit Suisse overnight index swaps show that the market implied chance of a 25-bps rate cut stands only at 17.2%, while only -5.7-basis points have been priced out over the next 12-months.

While swaps markets aren’t yet showing favor towards a rate cut, the short-term lending environment is shaping up to offer the strongest incentive for the ECB to act. The interbank Euro-Zone rate (EONIA) has jumped to 0.337%, above the ECB’s reference rate of 0.25%; the 20-day (four-week) average is now 0.243%. Look no further than the low levels of excess liquidity in the Euro-Zone banking system, currently at a meager €85.2B. For these reasons, traders may be looking for signs that the ECB could be readying another LTRO round to cushion a weak credit environment.

In light of these developments, we still view the threatening overhang of ECB actionas a substantive enough threat to keep Euro bulls at bay. Economic data momentum, as measured by the Citi Economic Surprise Index, is near its weakest point of the year (the index closed at -25.4 on May 23, the yearly low is -28.3). Yet with volatility so low, more of the same could be expected: only modest erosion, with tight ranges, to prevail in the interim period before the June ECB meeting.

Accordingly, with respect to the Euro, we are looking to sell rallies and cover excessive dips; the ECB has disappointed with action previously, and a lack of a mini-‘bazooka’ could very-well see the Euro scream back towards its yearly highs. For your consideration, perhaps the most important development all along has been the retail forex trading crowd flipping its bias in EURUSD to net-long for the first time since July 2013 – when the pair bottomed and the Euro’s rally into the end of the year began. –CV