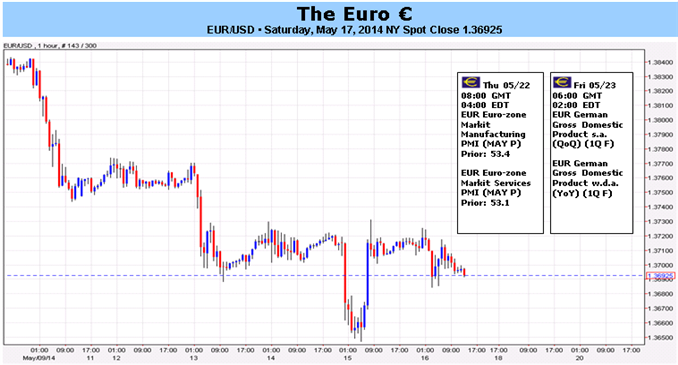 - EURUSD closed below $1.3700 for the first time since mid-February, but no thanks to the US Dollar, yet.

The Euro’s slide in the wake of the European Central Bank’s May meeting continued this past week, with the 18 member currency falling to its lowest aggregate levels since late-February, and closing at its weakest exchange rate versus the US Dollar since the week ended February 14. Indeed, with macro themes simmering – the Russian-Ukrainian conflict, Chinese growth concerns – focus remained squarely on the perception that the ECB was readying the markets for another round of easing at its monthly gathering in June.

Perhaps the most striking development this past week, which will galvanize Euro bears going forward, was news relating to Jens Weidmann, President of the Bundesbank and Germany’s top representative at the ECB’s Governing Council. Contingent upon the ECB’s June economic projections, the German central bank is reportedly ready to agree to additional non-standard easing measures – perhaps those that are unprecedented as well.

The scope for ECB action is plentiful. Euro-Zone inflation continues to bounce between 0.5% and 1.0% annualized, well-below the ECB’s 2% yearly target. Growth momentum has reached its lowest point of the year with the Citi Economic Surprise Index falling to as low as -28.3 this week, a yearly low (the index closed the week at -24.6). At a -3.0% annualized rate in March, loan origination to non-financial institutions continues to decline, meaning growth is likely to remain sluggish going forward.

Banks are unlikely to take it upon themselves to boost credit growth as excess liquidity in the region remains low (just over Є100B), meaning the ECB will have to be the bridge between small- and medium-sized enterprises (SMEs) and growth. This is especially the case amid the ECB’s stress tests (AQR), as banking institutions are trying to reduce their risk profiles.

The options the ECB could theoretically unveil, if it truly has Germany’s backing, are numerous, even beyond the standard rate cut. A move to negative rates is possible, which would in theory be the strongest long-term lever to keep the Euro pinned down. Large scale asset purchases could ensue (an ECB twist on the Fed’s QE) to help strengthen the ZIRP environment. To address low liquidity, another round of LTROs is also possible, which proved to be Euro negative in both December 2011 and February 2012.

The market has done its part thus far in knocking the Euro lower, and without specific indication as to which measures could be enacted, the pace of Euro declines could steady going forward; the worst may be over after EURUSD dropped from $1.3993 to as low as $1.3648 over the past seven trading days (the US Dollar has its own problems, so Euro weakness may be better achieved elsewhere). Yet with the Euro-Zone’s data slump worsening, and the purported backing of Germany, the looming possibility of something significant should keep the tone surrounding the Euro depressed; and at a minimum, we’ll be looking to sell rallies ahead of the ECB’s June meeting. –CV