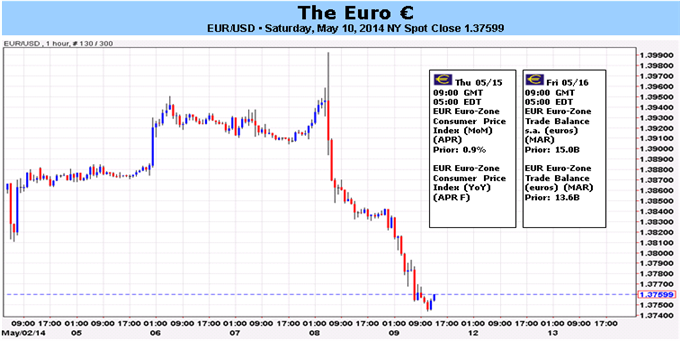 - …but ECB President Draghi’s promise of policy action in June weighed heavily on the single currency.

A serious flaw was exposed in the European Central Bank’s policy strategy this week, setting up the Euro for a potentially rough few weeks going forward. With ECB President Mario Draghi saying that the Governing Council felt “comfortable” enacting further dovish policies at the June meeting once the new staff economic projections were released, the market’s growing calls for new dovish action has been materially altered into a full-blown expectation of a substantive policy change in four weeks.

Market participants gleefully hoped on board the Euro bear train midway through President Draghi’s press conference on Thursday, taking the latest episode of jawboning a bit more seriously now that a veritable checkpoint down the road has been established for action that should undermine the Euro (the selling on Thursday and Friday is evidence of the market pricing in a small rate cut, with the number of basis points priced out of the Euro over the next 12-months moving from -4.3-bps on Wednesday to -11.4-bps on Friday).

Even though President Draghi indicated that the Euro exchange rate was not a policy tool, he did specifically say that it would be necessary to address if it undermined price stability. Incidentally, traders have taken this as a sign that persistently low inflation for the region is being blamed on the single currency (rather than the policies which got us to this point, of course) – and this is now the most daunting corner the ECB has painted itself into to date as it has essentially guaranteed some form of easing.

We can’t say that Euro weakness into the June meeting is guaranteed; but, in the sense that market participants needed a reason to offer the Euro lower, they’ve been granted one: the ECB wants a weaker currency, and it has promised a dovish policy response in return. And the market has responded, with the EURUSD dropping from a fresh yearly high of $1.3993 on Thursday to the close of 1.3760 on Friday.

Clearly the market is already responding, just like in late-October into early-November. The ECB proceeded to cut rates by 25-bps, and the Euro bottomed that day. The rate cut was baked in, with the EURUSD having fallen by over -3% in the preceding two weeks. The EURUSD retraced all of its loses over the next month and a half; inflation slipped back as the Euro rebounded. The ECB very much risks the same unfolding of events here, especially because the region continues to run large current account surpluses – there is a natural market inclination for the exchange rate to rise in response.

The market now has the ECB hostage. If there is no action, the ECB’s credibility will be torn to shreds and the Euro will shoot to the moon. But if it’s only a rate cut as a response, like what transpired in November, it is doubtful that the Euro will stay low for long either. Market participants will be hungry for more reasons to obey the ECB’s desire for a weaker currency despite certain financial (debt aspect of crisis has faded, sovereign yields at record lows) and trade (current account surpluses) fundamentals that dictate a stronger currency.

Now that the ECB’s main rate will be pinned near zero percent, the Euro may about to become a victim of the ECB’s policy missteps (President Draghi used to say the ECB never pre-commits; now totally discredited). It’s only a matter of time before market participants threaten to push the Euro higher unless the non-standard realm of policy is entered – negative rates and/or full blown QE. –CV