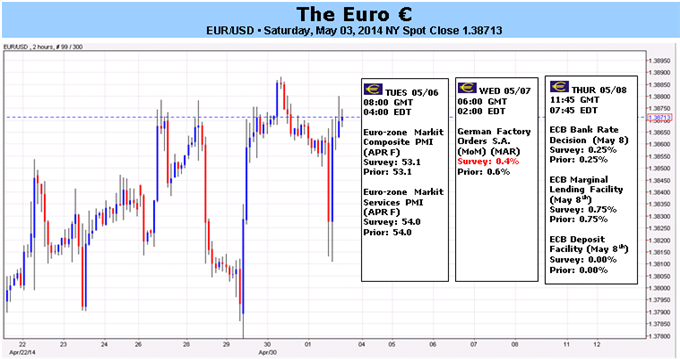 - The EURUSD’s low volatility slumber may finally be ending in the wake of a very mixed US Nonfarm Payrolls report.

- EURUSD may be on the verge of breaking its two month consolidation if prices move through $1.3905 this week.

The Euro’s sideways shuffle continued into the month of May, trading lower by -0.1% versus a basket of currencies over the last five days. In fact, the Euro has done very little of anything the past few weeks, with the same‘long EUR, short AUD, CAD, CHF, GBP, JPY, NZD, and USD’ basket losing a mere -0.03% over the past 20 trading days (four weeks) (this basket is only down by -1.23% YTD). With economic data continuing to churn and offering no clear direction, it’s likely that the neutral inertia of European Central Bank policy is to continue at the upcoming meeting on May 8.

It feels like we’ve been here before, on the cusp of a ECB policy meeting: inflation pressures are neither intensifying nor deflating from their current low levels, which might warrant additional dovish policy action, including non-standard measures such as a large scale asset purchase program; yet the individual country and regional PMI surveys point to ‘green shoots’ (signs of economic growth developing after a downturn).

The April core CPI reading came in this week at +1.0% y/y, as expected, from +0.7% y/y, though the April CPI estimate disappointed at only +0.7% y/y from +0.5% y/y, instead of the forecast +0.8% y/y figure. Whereas these data aren’t enough to dismiss deflation fears, the fact that Euro-Zone PMI Manufacturing has stayed at or above expansionary levels (>50) for 10 consecutive months gives policymakers hope. It’s also unsurprising, then, that policymakers are expressing their desire for a weaker Euro – it would enhance the region’s very preliminary signs of growth returning.

Now that economic data is starting to settle (the Citi Economic Surprise Index ended the week at -10.5, in line with its 20-day average of -9.3), ECB policymakers are going to look beyond the top level picture (which offers no clear direction) and instead focus on various monetary conditions. The overnight interbank lending rate (EONIA) that we’ve cited numerous times the past few weeks as a potential cause for concern is less of a threat even as it persists over the ECB’s reference rate (0.40% (EONIA) versus 0.25% (ECB main refinancing rate).

Now that excess liquidity in the Euro-Zone has surged to €160.3B from €80.4B, it’s possible for elevated interbank lending rates cool off in the short-term. This development, alongside the data environment, will take pressure off of the ECB to act aggressively in the near-term. The ECB has made clear its lack of desire to unload a ‘bazooka’ of monetary stimulus during the regional banks’ stress tests, so as to not stir confusion and fear about the health of the Euro-Zone financial system.

Instead, we look to the May policy meeting as more of a ‘filler’ before the June policy meeting, at which the ECB will make adjustments to its economic projections and will have had more inflation data to process in the interim. The three-pronged development of higher core CPI, improved PMI surveys, and increased excess liquidity reduces any immediate need for substantive action, like the unveiling of QE. The ECB must now partake in a careful balancing act, as its dovish policy responses are limited even as President Mario Draghi pays lip service to the hope for a weaker Euro. –CV