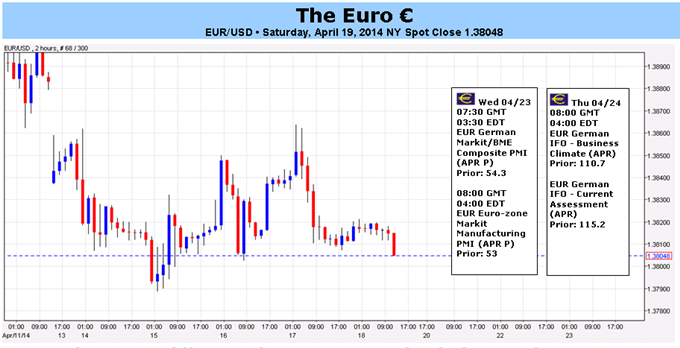 - The ECB continues to try and talk down the Euro, but there has been little if any success thus far.

- With the retail trading crowd still heavily long the US Dollar, the Euro remains in the driver’s seat.

Despite the continued and prevalent threat of aggressive dovish policy action by the European Central Bank, the Euro remained buoyant against its major counterparts for the second straight week as volatility strikes every other major asset class around the world expect for FX. Rollercoaster tensions in Eastern Europe between Russia and Ukraine have done little if anything to dissuade traders from staying long the Euro, though the persistent disappointment in Euro-Zone economic data has rarely allowed for a substantial rally either.

The viability of the ECB’s seemingly scattered dovish monetary policy could be put to the test this week amid a light stream of economic data. The ECB’s approach to preparing the market for a round of quantitative easing – ideally coming after the November banking stress tests (AQR) so as to not confuse the market with a massive liquidity injection while the ‘health check’ is still under way – has proven less unified over the past several days.

Evidently, the ECB wants to have its cake and eat it too: it is threatening action but doesn’t want to ever have to pull the trigger; it expects market participants to comply with its demands for a weaker currency just as the market did for a stronger currency when it lifted the Euro up from the depths of the Euro-Zone financial crisis on the back of ECB President Mario Draghi’s “whatever it takes” to save the Euro promise in July 2012.

There’s little reason for traders, at present time, to comply with the ECB’s demands. As we’ve previously mentioned in this weekly note, Euro bears have simply been on the losing side of the trade even after the ECB cut its main deposit rate to 0.25% in November 2013. Since November 7, EURAUD is up by +4.11%; EURJPY has gained +6.97%; and EURUSD has appreciated by +2.85%. The best performer versus the Euro over the same time period, the British Pound, has only gained +1.35%. Simply put, even the ECB’s conventional policy tool (interest rate changes) has failed to dissuade Euro appreciation. More is needed than further jawboning.

Fortunately for the ECB, the economic data backdrop has been disappointing enough so as to prevent a further push by EURUSD through $1.4000, apparently a threshold of pain for the ECB given the recent rise in dovish rhetoric on approach to the big round figure. As a proxy for momentum of economic data (better or worse than expectations), the Citi Economic Surprise Index has fallen to -10.6 by this week’s end, a yearly low for 2014.

With the incoming economic data slate set to show a slight deterioration in the Euro-Zone’s growth prospects in both the core economies – Germany and France – the ECB’s pleas for weaker FX rates might be heard a little more clearly this week. The Markit PMI surveys across the board are set to show slight deteriorations in the rate of growth (positive but at a slower pace), which should help keep the Euro in its state of indecision, having stayed within +/-0.50% of six of the major currencies thus far through April. –CV