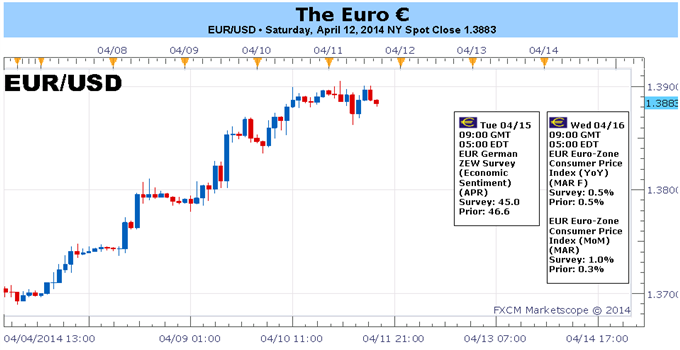 - The ECB hinted at QE, but the Euro failed to lose ground versus the US Dollar after the weaker March NFPs.

- The Euro was weaker elsewhere, and faces perhaps its most serious threat in the Japanese Yen if equity markets dive further.

The Euro’s weakness in the wake of the European Central Bank’s most recent bout of intensifying its dovish forward guidance was hardly apparent last week, as the Euro paced as the third strongest major currency versus the US Dollar (EURUSD +1.30%). With the US Dollar reeling from a sustained streak of weak economic data amid the Federal Reserve tapering QE3, the focus this week was on the unwind of USD-based risk positions.

With the Euro-Zone, thanks to its largest economy, Germany, running a current account surplus, there is a natural inclination for market forces to push the exchange rate higher as a corrective mechanism. Accordingly, when the US Dollar undergoes a series of mishaps as it has the past few months – poor consumption data, weak trade data, disappointing jobs data, and mixed signals from the Fed – the Euro instantly generates positive attention. Central banks have taken notice: in Q1’14, the Euro gained about +0.35% of the total share in global forex reserves (top among major currencies), while the US Dollar’s presence dissipated by about -0.55% (International Monetary Fund).

Euro-Zone economic data has been poor in its own right (which is why the discussion of QE by the ECB is back on the table). The Citi Economic Surprise Index fell to -9.9 on April 11, its lowest level of 2014 and lowest since June 21, 2013. There’s been little evidence to suggest that market participants have stayed in the Euro for optimistic speculative reasons.

Therefore, what we may be witnessing is that, as global central banks diversify away from the US Dollar, and as the Euro-Zone continues to progress from the depths of its financial crisis, the Euro engenders the role of an alternative safe haven. Price action among the forex majors this week supports this assertion. With US equity markets plunging in the second half of the week, all of the Euro’s losses versus the Australian and New Zealand Dollars were wiped out; the Euro was the third best performer overall behind the Swiss Franc and the Japanese Yen.

Even in the face of global risk aversion, the Euro was only able to squeeze out minor gains of +0.18% and +0.27% against the Australian and New Zealand Dollars, which have proved surprisingly resilient to concerns over emerging market growth thanks to significant outperformance by their respective domestic economies. The desire for traders to shift from the higher yielding currencies to the lower yielding currencies was exceptionally muted.

If the economic data environment improves for the Euro, then the conversation can shift back to the Euro gaining ground amid growth speculation. This week, the Euro was more or less the “anti-US Dollar.” The Euro’s financial underpinning, beyond the weak economic data environment, is soft as well. Interbank lending rates continued to push higher in recent weeks: in April, the EONIA rate has averaged 0.212%; in March, it was 0.192% (excluding the March 31 spike to 0.688%, the March average would have otherwise been even lower at 0.167%). In light of these facts, there is little evidence that the ECB’s threat of QE will disappear anytime soon, leaving the Euro vulnerable should economic data improve elsewhere around the world. –CV