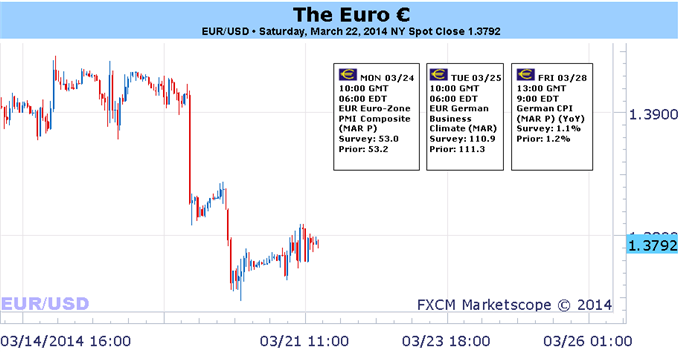 A Vulnerable Moment for the Euro as Sentiment Evolves Post-FOMC

- The Euro has had a rocky few days after ECB President Draghi warned on Euro strength.

- The midweek EURUSD triangle was resolved after the FOMC rate decision.

The Euro’s bullishness halfway through March hit the proverbial skids this week as the Federal Reserve’s rate decision provoked a sharp snapback in the EURUSD, dragging down other EUR-crosses in the process. Amid a week where the calendar was largely absent of significant economic data, it was this foreign-borne event that proved to be the strongest influence on the single currency over the past five days.

The appearance of a more hawkish FOMC – anointed on Fed Chair Janet Yellen’s slip of the tongue that the first rate hike could come around six months after QE3 was fully tapered – has helped further recalibrate the needle for the EURUSD.Just two weeks ago the European Central Bank made clear it was intending to stay on the sidelines as growth crept back into the picture and crisis conditions remained at bay. This perceived hawkish ECB was complemented by weak US economy data, leading to speculation over a more dovish FOMC.

If the prior underlying sentiment in the market was for a patient ECB and a nervous Fed, the script has flipped over the past two weeks leading us to a much less optimistic view of the EURUSD specifically, and now the Euro overall. Rather than staying on hold,ECB President Mario Draghi has warned that the elevated Euro exchange rate has been hampering growth. For the Fed, it’s clear that the weakness in data seen the past few weeks (“the weather”) wasn’t enough to spur a dovish shift; the Fed and the ECB have had their respective roles seemingly reversed very recently.

The Euro may be especially vulnerable for a larger snapback now that central banks sentiment has been primed for a weaker EURUSD in the near-term. As always, given the reality of the ECB’s position – it is firmly on hold – a downturn in European economic data will be necessary for any serious Euro weakness to snowball. Already this past week it was revealed that Euro-Zone inflation slipped back to a post-2008 crisis low of +0.7% y/y, the level at which the ECB most recently decided to cut its main refinancing rate in November 2013.

Economic data out of the Euro-Zone has been starting to disappoint generally, with the Citi Economic Surprise Index falling to +6.9 by March 21, the monthly low. While this remains above the index’s yearly low of -0.8 set on February 26, it is well off of the yearly high seen on January 28 at +30.3. Data momentum looks to be under further pressure this week with the various PMI readings for March due, with the Euro-Zone Composite, German Manufacturing and Services readings all set to decline from their February levels.

In terms of funding stresses, interbank lending rates remain below the ECB’s overnight reference rate (0.25%) but signs of modest pressure are starting to show. While settling at 0.163% on Friday, the 20-day average EONIA rate was 0.169%, up from 0.156% one-month early (February 22), and up from 0.149% three-months earlier (December 20). With LTRO repayments ongoing, a further reduction in excess liquidity alongside softer economic data –exacerbated by renewed speculation over the Fed winding down its stimulus measures sooner than expected – could support a state of elevated lending stresses.

If the market’s fear of the ECB grows amid the recent flip in central bank narrative, with speculators now the most bullish the Euro since the week ended October 29, 2013 (CFTC’s COT data shows Euro longs increased by +45.6% to 52,991 contracts for the week ended March 18, 2014) the perfect mini-storm for Euro weakness over the coming days and weeks may be developing. –CV