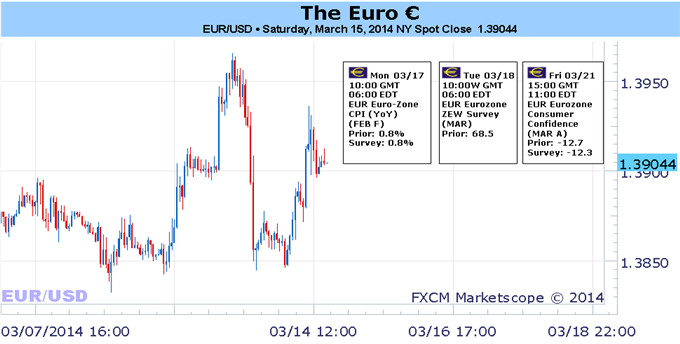 ECB’s Draghi Warns on Euro Strength – Will it Keep Rising?

- The Euro melt-up was in full swing this week until ECB President Draghi spoke on Thursday.

- Forex seasonality over the past 20 years favors a stronger EURUSD in March.

It was a week for the Euro to digest its recent gains after the European Central Bank rate decision on March 6, and the Euro’s performance by Friday reflected a neutral yet volatile resolution to the past five days. Amid a rather absent economic calendar, the most significant event to dislodge the Euro from its resiliency was a batch of commentary from ECB President Mario Draghi on Thursday.

The concern President Draghi expressed was that the Euro was becoming, in plain language, too strong, and its impact was reverberating in several ways. Competitiveness in the region – mainly the periphery nations – was suffering as a result of the recently elevated exchange rate. We’ve previously expressed that this is a shallow argument in light of recent growth data.

In support of the ‘stronger Euro reflects confidence in the region’ argument, consider that on an equal-weighted basis versus the Australian Dollar, the British Pound, the Japanese Yen, and the US Dollar, the Euro gained +1.12% in the 3Q when GDP was -0.3% y/y; growth accelerated in the 4Q to +0.5% y/y when the Euro basket gained +4.01%. It’s difficult for anyone to suggest that the Euro represents a constraint to growth from this perspective; the higher Euro is a result of capital returning to the region.

The Euro-Zone Current Account (BOP) surplus expanded to €33.2B in December, its largest surplus ever, up from €27.2B in November. This is notable because the Current Account reflects all transactions (ex financial) including trade in goods, services, income and current transfers between a country’s/region’s residents and non-residents. The higher Current Account thus reflects capital flows coming into the Euro-Zone, and not out of it; this is a natural upside pressure supporting the Euro.

While the Current Account surplus reflects a low level of imports and only modest export growth, the weak Euro-Zone consumer is evidently afflicted and not the cause of the Euro’s resiliency. The fact that President Draghi said that the argument was evidently focused on inflation being “too low” rather than “too high” isn’t surprising: we’ve heard comments about low inflation and how it’s been a concern for months. The volatile components of the Consumer Price Index (food, alcohol, tobacco, and energy) that tend to eat into disposable income are a net-negative weight: the headline CPI is +0.8% y/y; the Core CPI is +1.0% y/y.

The higher Euro is helping keep the non-Core costs constrained which helps fiscal policymakers; but considering that consumption overall remains low in a tepid jobs environment, inflation for the sake of inflation (reflected by the non-Core inputs) could do more harm than good: in an era of deleveraging, consumers will be forced to forego spending elsewhere if non-Core inputs rise, weighing further on growth.

For now, President Draghi’s warning is just that: a warning. We’ve previously demonstrated that the bar is high for the ECB to entertain non-standard easing measures, and if the “line in the sand” for the EURUSD exchange rate was $1.4000 before it was considered “too strong,” then the ECB wouldn’t start trying to knock back the EURUSD now – that would have occurred closer to $1.3500 to try and prevent a test of $1.4000 altogether.

Instead, we think that this commentary from President Draghi is merely the first warning, meaning the threshold for action is higher ($1.4500?). Barring a return of crisis conditions, the most palatable outcome for the ECB at present time is a BoE-styled Funding for Lending Scheme (FLS) targeted at boosting credit growth to small- and medium-sized enterprises (SMEs). –CV