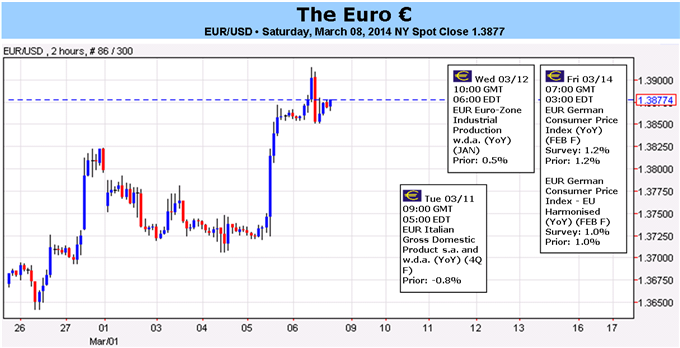 - Forex seasonality over the past 20 years favor a stronger EURUSD in March.

The Euro’s resiliency continued to shine this week as a bout of mixed economic data took a backseat to the European Central Bank’s policy meeting on Thursday. On a cooling of tensions in Eastern Europe and seemingly diminished outcome of military conflict, the higher yielding currencies led the pack as risk appetite surged: the EURAUD depreciated by -1.08% and the EURNZD eased by -0.38%. The Euro’s strength came through in the last two days of the week, and its gains elsewhere are constructive going forward.

While the ECB’s meeting on Thursday helped the Euro realize its pent up bullish potential, it may have just paved the way for further gains over the coming months. The window in which to ease further may be closing, and as a result, the door to a period of monetary stability may have been opened.

As ECB President Mario Draghi made clear in the press conference on Thursday, the ECB does not want to simply just inject more liquidity into the Euro-Zone banking system; there is little need right now. Interbank lending rates (EONIA) are stable below the ECB’s overnight reference rate of 0.25%, which means funding stresses are low. Sovereign yields are stable at multi-year lows (bond prices at highs) and equity markets are buoyed; the linkages between the Euro-Zone banking system and her sovereigns are being strained.

With the PMI surveys pointing to continued modest growth and Euro-Zone inflation starting to tick higher, any new non-standard dovish policies could send the wrong signal as the ECB undertakes role as supervisor of the Euro-Zone banking system; economic data has been generally improved recently, even consumption. As the ECB prepares its stress tests (AQR), announcing a liquidity injections before the results come out might signal to the market that the ECB discovered something unknown and materially negative once they began to review banks' balance sheets.

Instead, so as to prevent unnecessary confusion about the health of the banking system, the ECB is stuck in neutral. To be clear: the ECB stands ready to act if necessary, and quite frankly, it seems that the Governing Council would like to do more. But at present time, short-term economic momentum doesn’t dictate that necessity. This is not inaction; this is a deliberate attempt to do nothing and see where the chips fall. Only if data falls back will the ECB act – crisis conditions don’t exist.

Eventually, a BoE-styled Funding for Lending Scheme (FLS) seems like the most palatable outcome for the market is crisis conditions remain absent. This could address credit concerns at the consumer and small business level (SMEs), and it wouldn’t put the Euro at risk of a massive ECB balance sheet expansion that another LTRO or a Fed-styled QE would bring (this would please the German influence). For now, data needs to remain sturdy as the door remains open for further Euro gains. – CV