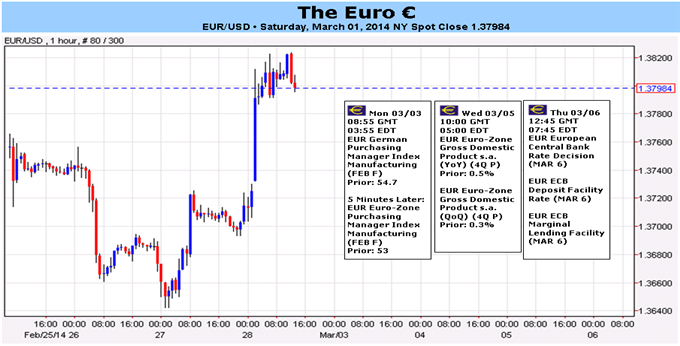 Euro Could Surge if Rebounding Inflation Translates into ECB Hold

- The Euro’s bullish expectations have been boosted after faster than expected February Euro-Zone inflation data.

- Higher inflation diminishes the chance of new non-standard easing measures by the ECB.

The Euro capped off a strong week by hitting fresh yearly highs against the US Dollar on Friday, seeing its highest exchange rate above $1.3800 for the first time since the week beginning December 22, 2013. It was not a pretty week for the Euro, though; the EURUSD nearly having clear 1.3600 to the downside on Thursday before staging its impressive near-200-pip comeback.

With the only true weight on the Euro right now speculation that the European Central Bank will enact further easing measures to fight purported deflation, the Euro looks well-positioned heading into next week given the February Euro-Zone inflation figures.

True, the Euro-Zone Consumer Price Index Estimate was still low at +0.8% y/y; but the EZ CPI Core reading perked up to +1.0% y/y – the first time it was at or above +1.0% since September. Rebounding inflation right now fits neatly in with ECB policy. Policy rate changes typically take around six-months to fully cycle through developed economies, and the ECB cut its main rate to 0.25% in November.

The recent bout of inflation data may have been the best shot at weakening the Euro’s resiliency. Instead, the Euro’s bull run from last summer may be gearing up as ECB policymakers find little reason otherwise to enact aggressive easing policies. A look at EONIA rates (interbank lending rates) shows that the cost of capital is falling and the Asset Quality Review (AQR - stress tests) may have been the reason for higher rates at the beginning of the year. EONIA rates remain below the ECB’s main rate, settling at 0.162% on Friday, and the 20-day average was 0.155% - lending conditions are stable.

An expanded view of credit conditions on the sovereign level see peripheral yields holding at or near multi-month and multi-year lows; financial conditions wholly do not scream the necessity for more easing right now. The ECB wants inflation, true; but it wants organic inflation – the result of accelerating economic activity resulting in excess demand over supply.

The ECB isn’t simply going to fork over more capital to banks carte blanche during the stress tests and when crisis conditions aren’t present – this could result in only asset inflation rather than translating into credit growth for small- and medium-sized enterprises (SMEs).

In light of these stabilizing conditions, we maintain that a BoE-styled Funding for Lending Scheme (FLS) has become more appealing for the ECB as it could address credit concerns without putting the Euro at risk of a massive ECB balance sheet expansion that another LTRO or a Fed-styled QE would bring. (To this end: outright QE looks less likely after the German Constitutional Court ruling.)

At most, a small, 0.15% cut to the main rate could be made to help support the recent rebound in inflation pressures – but even that wouldn’t pin down the Euro for long as the ECB’s surprise November rate cut proved.–CV